For Your Viewing Pleasure: The Ragged Man (Full Cover) 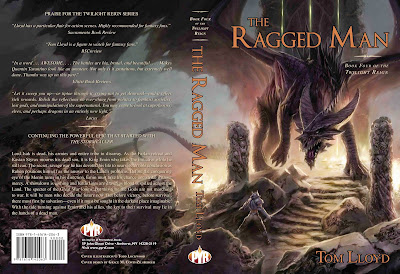 Coming from Pyr in August
Lord Isak is dead; his armies and entire tribe in disarray. As the Farlan retreat and Kastan Styrax mourns his dead son, it is King Emin who takes the initiative while he still can. The secret, savage war he has devoted his life to nears its terrible conclusion as Ruhen positions himself as answer to the Land's problems. Before the conquering eye of the Menin turns in his direction Emin must take his chance and strike without mercy.
A showdown is coming and battle lines are drawn as blood is spilled across the Land. The specter of the Great War looms but this time the Gods are not marching to war. It will be men who decide the future now. But before victory, before survival, there must first be salvation—even if it must be sought in the darkest place imaginable.

With the tide turning against Emin and his allies the key to their survival may lie in the hands of a dead man.
at 12:07 PM