For Your Viewing Pleasure: A Guile of Dragons 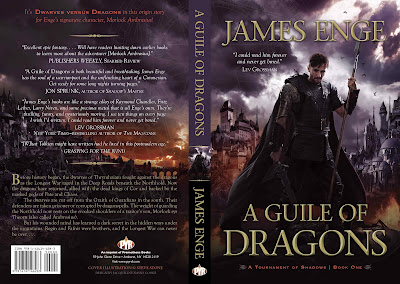 A Guile of Dragons (A Tournament of Shadows, Book 1)


It's dwarves versus dragons in this origin story for Enge's signature character, Morlock Ambrosius!Before history began, the dwarves of Thrymhaiam fought against the dragons as the Longest War raged in the deep roads beneath the Northhold. Now the dragons have returned, allied with the dead kings of Cor and backed by the masked gods of Fate and Chaos.
The dwarves are cut off from the Graith of Guardians in the south. Their defenders are taken prisoner or corrupted by dragonspells. The weight of guarding the Northhold now rests on the crooked shoulders of a traitor's son, Morlock syr Theorn (also called Ambrosius).
But his wounded mind has learned a dark secret in the hidden ways under the mountains. Regin and Fafnir were brothers, and the Longest War can never be over. . . .

"Morlock Ambrosius, son of Merlin Ambrosius and Nimue Viviana, roams the world of Makers, developed in Enge’s first trilogy (Blood of Ambrose, etc.), in this efficiently excellent epic fantasy. Morlock returns to the Whitethorn Mountains and the dwarfs of the Seven Clans under Thrymhaiam, who fostered him from infancy, and is placed under the charge of clueless Summoner Earno. The Ranga region has stopped shipping provisions to other areas of the Whitethorns, and Guardians have gone missing. Morlock and his foster father, clan elder Tyr syr Theorn, suspect foul play. Earno, on the other hand, assumes the son of traitor Merlin is concocting nefarious schemes. Enge’s engaging portrait of Morlock—who identifies much more as a tallish, less gray dwarf than as the son of a fabled mage—will have readers hunting down earlier books to learn more about the adventurer and his history." Publishers Weekly starred review

Link to this post
Email ThisBlogThis!Share to TwitterShare to FacebookShare to Pinterest
Labels: A Guile of Dragons, A Tournament of Shadows, Artwork, epic fantasy, Jacqueline Cooke, James Enge, Steve Stone, Sword and Sorcery

City of Ruins nominated for an Endeavor Award

The nominations for this year's Endeavour Award have been announced and Kristine Kathryn Rusch's and City of Ruins is one of the five finalists.

The Endeavor Award is given for a distinguished science fiction or fantasy book written by a Pacific Northwest author or authors and published in the previous year. It is named for H.M. Bark Endeavour, the ship of Northwest explorer Capt. James Cook. The award is announced annually at OryCon, held in Portland, Oregon. The next award will be presented at OryCon 34 (November 2012) for a book published during 2011. The award is accompanied by a grant of $1,000. 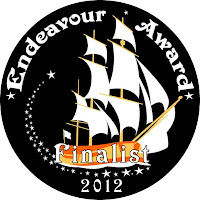 The other finalists are:

The judges for this year are; Gregory Benford, Lawrence M. Schoen, and Susan Shwartz.

Congratulations to all the nominees!
at 10:22 AM 0 comments