Inside the mind of Imago Bone

Posted by Lisa Kay
Ever wanted to get into the mind of a character? Well, even deeper than literally reading his or her thoughts and actions throughout a book?

Take a glimpse inside the failing mind of Imago Bone in Chris Willrich's newest book The Chart of Tomorrows. This handy list was written by Bone to help him remember the people he's met, the places he's seen, and the creatures that tried to kill him.  Sounds like a helpful list, if you ask me.

IMAGO BONE’S NOTES ON
PEOPLE, PLACES, AND THINGS
BECAUSE HE IS GETTING OLDER
AND HIS MEMORY IS TAXED 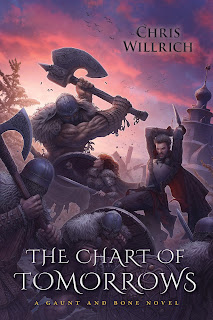 For all things Gaunt & Bone, check out The Scroll of Years and The Silk Map!

Posted by Lisa Kay
Feel like it's been forever since you've spent time with Jarra?  Think you physically cannot survive without some interplanetary travel before the final book, Earth Flight, comes out in September?

Well, luckily for you author Janet Edwards was nice enough to release some short stories featuring your favorite characters! Available now on Kindle (other devices coming soon) is the prequel collection Earth 2788 that you can grab for only $0.99.  Less than a buck?  Can't argue with that bargain.  Well, you technically can't argue with anything other than a human, unless you don't care about it being one-sided, but we don't judge.


And if you haven't had the chance to hop into Edwards' futuristic world, then Earth 2788 is a nice taste of what you've been missing.
at 1:14 PM 0 comments