An epic end is near! 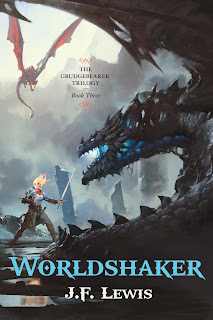 Later this month Worldshaker, the epic end to J. F. Lewis's Grudgebearer trilogy, comes out!  If you like your sword and sorcery with dragons, fae, and a world more detailed than our own, this series is for you.  Read on for an exclusive excerpt!

“Outstanding...one of the most uniquely layered and complex universes since Frank Herbert's Dune.”
—Starburst Magazine

Uled, the originator of the carnivorous Aern, the plantlike Vael, and the reptilian Zaur, has completed his plan to return from the dead, unleashing an army of undead creatures on the living world.

Kholster, who only recently became the god of death, must work together with other new deities to bring balance to the heavens and stop Uled. Can he prevent Uled's undead army from ravaging the world in time to save Rae'en and those he still loves in the mortal realm?

Worldshaker will be available in stores on February 21.
at 1:11 PM 10 comments