Give Yourself to the Rift 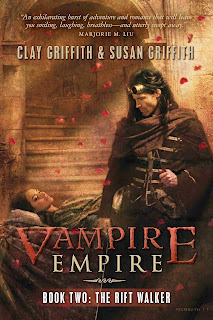 What people are saying about Clay and Susan Griffith's The Rift Walker (Vampire Empire, Book 2)

“I've said it before and I’ll say it again: The future of genre fiction is now – and it’s Clay and Susan Griffith’s Vampire Empire trilogy.”
-Explorations: The BN SciFi and Fantasy Blog, September 9, 2011

“The Vampire Empire series stands out because of its unabashed steampunk leanings and that is both great fun and a refreshing direction for the genre. It creates a world where science (albeit steampunk science) and magic clash head on and this is a major theme of this volume as Adele taps into her powers… I really enjoyed the first book, however I loved the second. The story built apace and left me eagerly anticipating the final part. 8 out of 10.”
-Taliesin Meets the Vampires, September 8, 2011

“The Vampire Empire series is becoming one of my favorite all time series. If you haven't read these books yet, I strongly recommend them. I know there are a lot of vampire books out there but this series sets itself apart from the rest. I can not say enough about this book. The first book blew me away and the second did it again. I absolutely love this series and I can't wait for the third book to come out.”
-2 Read or Not 2 Read blog, September 8, 2011

“I loved The Rift Walker. Clay and Susan Griffith can tell a good story that includes an exciting, fast paced battle, political intrigue, tender romance with believable technology and paranormal aspects. The only thing I didn’t like about this story is that I have to wait for the next book to come out!”
-Literary Escapism, August 28, 2011

“The sequel has hundred extra pages to tell it’s story over first book in the Vampire Empire series and they are packed with more locations, more political intrigue, more vampire mythology, more romance, and the same rich characters who captivated me in The Greyfriar…there is still plenty of action and intrigue that evokes the old pulp novels of the past, dashing and daring adventure though exotic locations, and sweeping romance between these star crossed lovers.”
-All Things Urban Fantasy, September 2, 2011

“The Griffiths…offer us what we came looking for: unrelenting action, adventure, romance and a fair bit of magic. There really is something for everyone here, and this, I think, really is the what makes the Griffiths’ writing so endearing…At the end of the day though, what I keep reading ‘Vampire Empire’, and what I imagine a lot of other readers keep reading these books for, is the all out epic entertainment they provide. In this respect, The Rift Walker really outdoes the first book, providing us with devilish conspiracies, all-out war on a reclusive vampire clan, airship chases, betrayals, heroics and complicated affairs of the heart, all told from a massive, epic scope…[The Griffth’s] continued mixing of tropes from steampunk, epic fantasy, urban fantasy and adventure is still refreshing and proof of how a bit of innovation - even in a purely gratuitous entertainment sense - can bolster a novel’s quality. If you haven’t yet gotten in on the Griffiths’ highly enjoyable, highly diverting ‘Vampire Empire’ trilogy I suggest you do so now. No matter what genre background you have, I can almost guarantee you’ll find something to your liking here.”
-LEC Book Reviews, September 2011