and Ghosts of War,

was recently a Guest of Honor at TeslaCon II in Madison, WI. While there, a very cool fan named Robert McAlister presented him with "the most awesome thing." It was a 12" action figure of The Ghost, hand converted, and mounted on a specially decorated plinth. 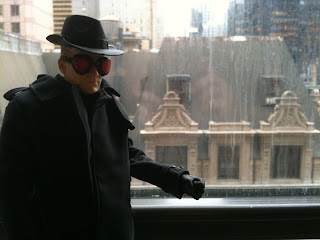 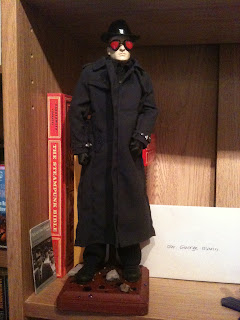 Posted by Lou Anders
Cynthia Sheppard at IlluXcon. Above and to the right of her, a sneak peak at a wonderful cover she did for us.

Planesrunner: Some Reasons It Should Be On Your Radar

Posted by Lou Anders
“Smashing adventure fiction that spans the multiverse without ever losing its cool or its sense of style. Ian McDonald is one of the greats of science fiction, and his young adult debut is everything you could hope for: romantic, action packed, wildly imaginative, and full of heart.”
—Cory Doctorow

is chock-full of awesome. Ian McDonald's steampunk London blazes on a vast scale with eye-popping towers, gritty streets, and larger-than-life characters who aren't afraid to fight for each other. The kind of airship-dueling, guns-blazing fantasy that makes me wish I could pop through to the next reality over, join the Airish, and take to the skies"
—Paolo Bacigalupi, Michael J. Printz Award–winning author of Ship Breaker

‎"Athletic, brilliant, and always ahead of the game, Everett is too perfect, but it doesn't detract from the book's fun. McDonald writes with scientific and literary sophistication, as well as a wicked sense of humor. Add nonstop action, eccentric characters, and expert universe building, and this first volume of the Everness series is a winner."
—Publishers Weekly Starred Review

"[Planesrunner's] world is as sharply imagined and inventive as we've come to expect from [Ian] McDonald. And it also may be the first steam-free steampunk novel… first-rate adventure writing… by the cliffhanger ending we're ready to follow [Everett] into whatever new universes McDonald can concoct, and the next one already looks interesting. Planesrunner is not only excellent YA SF in terms of its likeable characters and well-executed setpieces, but is simply good SF in a way which almost reinvents, and possibly makes addictive, the old parallel universe trope. It's fun."
—Locus, November 2011

"Planesrunner is a first class teen science fiction novel, which I believe will appeal to the fans of such boy-oriented books as Paolo Bacigalupi's Ship Breaker and Scott Westerfeld's Leviathan… There is hardly anything about Planesrunner to complain about. Quite the opposite, a lot to complement this novel on: First of all, the science. The whole idea of parallel universes is endlessly exciting and Ian McDonald did a fantastic job coming up with alternate versions of Earth's future… Second, the main character with ethnic background… Third, the teen romance has a great dynamic. Both participants are strong and resourceful young people. Planesrunner is a fantastic beginning to a new teen adventure series that will leave you yearning for more. Score: 4.50 / 5 "
—Night Owl Reviews, Reviewer Top Pick

‎"Ian McDonald's Planesrunner is the first in what I hope is a very long series of young adult science fiction novels.... I can't wait for the next book in this series. Planesrunner, scheduled for release in December 2011, is an appealing alternative to the dystopian YA titles lining bookstore shelves these days."
—Portland Book Review

‎"This is science fiction adventure at its best, and at its core is Everett, the heroic little geekling that we all wanted to be as kids... With "Ten Known Worlds" as part of this book's lore…I want an interdimensional passport ASAP… The adventure simply never stops… Snappy dialogue…and fascinating details round out this marvelous series debut."
—The Examiner