Posted by Lisa Kay
If you read epic fantasy, you know the tropes can get a little bit stale.  We admit, there is absolutely nothing wrong with being in the mood for a good, old-fashioned, sword-filled journey to find the thing that will save mankind. But every once in a while you just need someone to shake it up a bit. 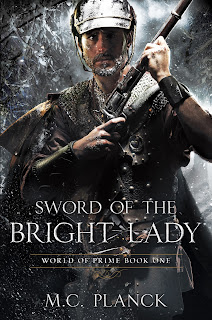 Take M. C. Planck's World of Prime books. In Sword of the Bright Lady, Christopher Sinclair goes out for a walk on a mild Arizona evening and never comes back. He stumbles into a freezing winter under an impossible night sky, where magic is real—but bought at a terrible price. To win enough power to open a path home, this mild-mannered mechanical engineer must survive duelists, assassins, and the never-ending threat of monsters, with only his makeshift technology to compete with swords and magic. 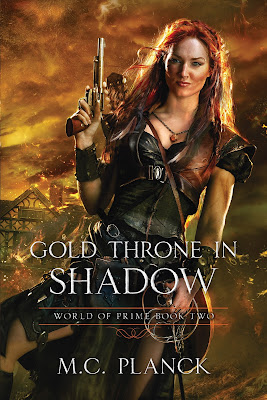 Planck infuses his world with the life and death rules of your favorite RPG. Kill your enemies, take their power, and move up the ranks until you win. In this month's newly released Gold Throne in Shadow, Sinclair has just used one of his lives to rise from the dead.  Finding his way back home may not be nearly as easy as he once hoped when he discovers the true enemy: an invisible, mind-eating horror who plays the kingdom like a puppet-master’s stage.

Plus the cover of Gold Throne in Shadow reminds me of fall.  So what if the world is actually on fire? The oranges and yellows match the view out my window and I DON'T CARE.

Rising Tide is out today! 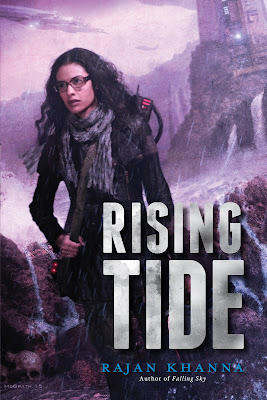 “A cool world with steampunk and zombies combined. . . . The voice is very real and gritty and I felt immersed in the world. Abercombie-edgy and a quick read at that.”
--Felicia Day

“Falling Sky grabbed me right away and held me to the last sentence. . . . [It’s] like Hemingway meets The Walking Dead.”
--Tad Williams

Rajan Khanna is back this month (today, actually) with his latest action packed adventure Rising Tide. Ben Gold sacrificed his ship in an effort to prevent pirates from attacking the hidden island city of Tamoanchan. Now Malik, an old friend turned enemy, has captured Ben and Miranda, the scientist Ben loves. With Miranda held hostage, Ben has to do Malik’s dirty work.

Miranda has plans of her own, though. She has developed a test for the virus that two generations ago turned most of the population into little more than beasts called Ferals. She needs Ben’s help to rescue a group of her colleagues to perfect the test—but first they must rescue themselves.

Check out the first chapter excerpt below to dive (pun totally intended.  You'll see.) into this post-apocalyptic world!

The lights come and wake me from dying.
At least I must be dying because I’m wet and cold and bleeding and every­thing seems broken inside of me. All around me I can smell smoke and burning gas and the sea.
Inside of me, a voice insists that there’s something next to me. Something good. Something to save me. But when I try to turn, everything goes black again.
Death hovers, close by.
The lights bring me back, dancing over me with a roaring hum. I remember stories I read when I was a kid, stories of angels—bright, blinding, flying angels. Have they finally come for me?
Some moments pass, my head spinning, and then they’re lifting me up, out of the raft, and into the sky. Where are you taking me? I want to ask. But I can’t. And something about leaving the ocean, going up into the sky, feels right.
More time passes—hands touching me that I can’t shrug off. I slip away once or twice.
When I awake again, I hear someone saying to take me to the infirmary. It’s apt because I’m very fucking infirm. Anyone would be after the last few days I’ve had. Beaten, shot, strung out on painkillers, beaten again, stabbed, then dropped from an exploding airship into cold ocean waters.
Well, when I say dropped, I mean more like I jumped. But it seemed like a good idea at the time.
Thinking about that makes me think of the Cherub, my airship, which was named after angels, and the last time I saw her, ripping apart into a bright fire­ball as I fell. It brings on pain of a different flavor. She was more than just my home—she was my safety, my security, my freedom.
“Miranda,” I manage to gasp. She’s the other woman in my life. Or rather, the one who’s left. She fell with me, into the ocean. We somehow both managed to survive, huddled in the bottom of a life raft, clinging to one another, wet and cold, our ears still ringing from the explosion, flames still dotting the water where the fiery wreckage fell.
We lay there, together, and I couldn’t even think. All I did was hold Miranda and take comfort in the fact that we were alive and together and she was solid in my arms. Later, I thought that if we managed to make it through the night into the morning, that we might have a shot.
She was what was next to me, I remember. She’s what I was trying to find.
“Miranda,” I repeat.
“Who?” a voice asks.
“That’s her name,” another voice replies. “The woman.”
“Where is she?” I ask. “Is she okay?”
“She’ll be back soon,” one of the voices says.
I reach up for the arms nearest me, grip them as hard as I can. “No,” I say.
“I need to know.”
Then my grip wavers and my arms go watery and the person pulls away from my grasp. “Give him another one,” a voice says.
Then I feel a sharp pinch.
And the world draws away around me.
*   *   *


If you haven't already, don't forget to pick up a copy of the first book, Falling Sky!
at 3:56 PM 0 comments