Coming Soon (and Now).. more in the Diving into the Wreck universe

is proving to be quite a hit. Portions of the novel had already garnered not one but two Asimov's Readers Choice Awards before the book itself came out. And since Diving appeared, the novel is garnering numerous favorable comparisons to the best of sf film and television, in that it brings back a sense of action and adventure that Rusch herself feels is so often lacking in contemporary SF literature.

So I know quite a few of you will be as excited to learn as I am to announce that  we've just shaken hands on a sequel, City of Ruins, so that fans can follow the further adventures of Boss and her crew. The novel sees Boss dealing with the repercussions of events in Diving, and further expands the universe in which the novel takes place in all sorts of interesting ways.

Meanwhile, for those wanting to learn more about the Diving universe right now, Rusch's short novel, The Spires of Denon, is out  from Scribd. You can see a preview on their site and buy the whole novel for online reading or download for a measly $1.99.

Link to this post
Email ThisBlogThis!Share to TwitterShare to FacebookShare to Pinterest
Labels: Diving into the Wreck, Forthcoming Books, Kristine Kathryn Rusch, The Spires of Denon

For Your Viewing Pleasure: Gardens of the Sun

Posted by Lou Anders
Gardens of the Sun 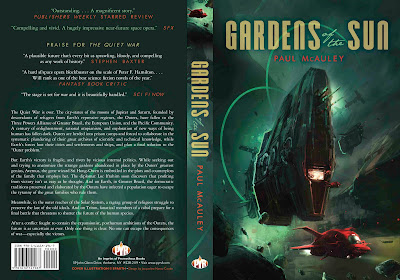 The Quiet War is over. The city states of the moons of Jupiter and Saturn have fallen to the Three Powers Alliance of Greater Brazil, the European Union and the Pacific Community. A century of enlightenment, rational utopianism and exploration of new ways of being human has fallen dark. Outers are herded into prison camps and forced to collaborate in the systematic plundering of their great archives of scientific and technical knowledge, while Earth's forces loot their cities, settlements and ships, and plan a final solution to the 'Outer problem'. But Earth's victory is fragile, and riven by vicious internal politics. While seeking out and trying to anatomise the strange gardens abandoned in place by Avernus, the Outers' greatest genius, the gene wizard Sri Hong-Owen is embroiled in the plots and counterplots of the family that employs her. The diplomat Loc Ifrahim soon discovers that profiting from victory isn't as easy as he thought. And in Greater Brazil, the Outers' democratic traditions have infected a population eager to escape the tyranny of the great families who rule them. After a conflict fought to contain the expansionist, posthuman ambitions of the Outers, the future is as uncertain as ever. Only one thing is clear. No one can escape the consequences of war - especially the victors.
at 1:20 PM 10 comments

Link to this post
Email ThisBlogThis!Share to TwitterShare to FacebookShare to Pinterest
Labels: Artwork, Gardens of the Sun, Jacqueline Cooke, Paul McAuley, Sparth

SurfaceScapes Dungeons and Dragons gets even better

Posted by Lou Anders
They've updated. God, this is amazing:


SurfaceScapes Gameplay Session from Surfacescapes on Vimeo.
at 12:20 PM 2 comments

Link to this post
Email ThisBlogThis!Share to TwitterShare to FacebookShare to Pinterest
Labels: Dungeons and Dragons, RPG, SurfaceScapes

Posted by Lou Anders
John Blyler has posted another random YouTube clip from our interview at OryCon 31. This excerpt features a surprise appearance by Louise Marley and Kay Kenyon (whose Prince of Storms

James Enge on I Should Be Writing 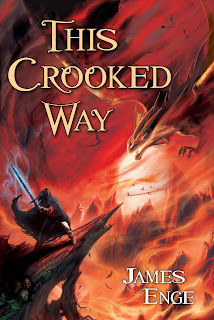 James Enge is one of the guests on episode 140 of Mur Lafferty's I Should Be Writing podcast. They talk about his novels Blood of Ambrose

and This Crooked Way

, but given that this is a writing-focused podcast, there is much good advice for how to deal with the various ups and downs of a writer's life. (John Claude Bemis is also interviewed.)

Link to this post
Email ThisBlogThis!Share to TwitterShare to FacebookShare to Pinterest
Labels: Blood of Ambrose, James Enge, Podcast, This Crooked Way 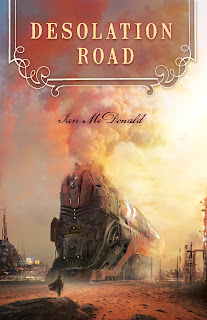 Ian McDonald's brilliant "Vishnu at the Cat Circus," the original story that closes out Cyberabad Days,

has made the 2010 BSFA Award Shortlist, in the category of Best Short Fiction. Being a UK award, this is for the Gollancz edition, so we won't list it here on (ahem) Pyr's list of amazing accomplishments. But we are thrilled for Ian, and with this, and the PKD nomination for the entire collection, wonder what other award nominations might be in store for Ian... (cough, cough).

Meanwhile, I was equal parts delighted and surprised to see the cover for Desolation Road

up for a BSFA as well in the category of Best Artwork. It's got to be rare for a US cover to get a nod from the British Science Fiction Association Awards, right? And from the look of the press release, the nomination is shared equally between illustrator Stephan Martinière and designer Jacqueline Nasso Cooke, which thrills me no end.
at 11:56 AM 5 comments 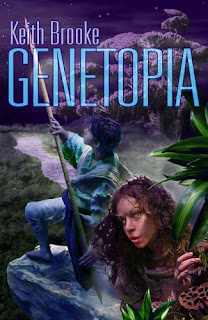 A little while ago Keith Brooke submitted his PhD thesis (creative writing) at the University of Essex. It consisted of his Pyr-published novel Genetopia, together with a lengthy critical commentary upon the fiction, writing and publishing, utopia and dystopia and science fiction more generally. Yesterday was the date of the viva voce examination -- part of the process by which UK PhDs get awarded: Keith was grilled by two external examiners, Graham Joyce (from the University of Nottingham) and Adam Roberts (from the University of London). The upshot was that the thesis was passed, without corrections, and Keith is now Dr Keith. The examiners praised the novel in particular: 'accomplished and exciting', 'excellent work ... fluently and compellingly written—engaging, believable, and often moving; the worldbuilding exceptional in both overall vision, specific detail and general coherency; the narrative line well paced and compelling.'

Congratulations to Keith!
at 5:07 AM 2 comments

For Your Viewing Pleasure: Petrodor (A Trial of Blood & Steel)

Posted by Lou Anders
Petrodor (A Trial of Blood & Steel) 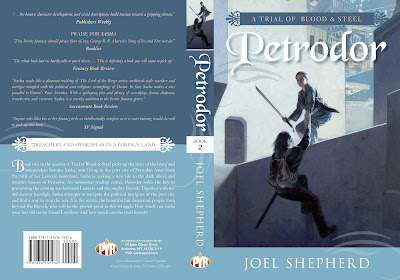 Book Two in the quartet, A Trial of Blood & Steel, picks up the story of the brave and independent heroine, Sasha, now living in the port city of Petrodor. Away from the hills of her Lenayin homeland, Sasha is making a new life in the dark alleys and wealthy houses of Petrodor. An influential trading center, Petrodor holds the key to preventing the coming war between Lenayin and the mighty Bacosh. Together with her old mentor Kessligh, Sasha attempts to navigate the political intrigues of the port city and find a way to stop the war. It is the serrin, the beautiful but dangerous people from beyond the Bacosh, who will be the pivotal point in this struggle. How much can Sasha trust her old serrin friend Errollyn? And how much can she trust herself?
at 2:52 PM 19 comments

Posted by Lou Anders
Via SF Signal and well worth every minute: 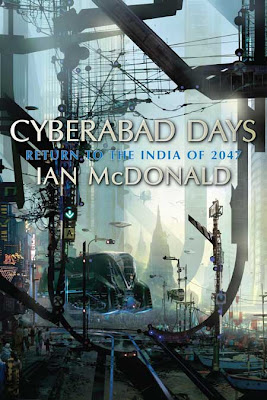 The judges of the 2009 Philip K, Dick Award have announced the list of nominees, and we are absolutely thrilled that Ian McDonald's Cyberabad Days

The judges of the 2009 Philip K. Dick Award and the Philadelphia SF Society, along with the Philip K. Dick Trust, are pleased to announce seven nominated works that comprise the final ballot for the award:


First prize and any special citations will be announced on Friday, April 2, 2010 at Norwescon 33 at the Doubletree Seattle Airport Hotel, SeaTac, Washington.

The Philip K. Dick Award is presented annually with the support of the Philip K. Dick Trust for distinguished science fiction published in paperback original form in the United States.  The award is sponsored by the Philadelphia Science Fiction Society and the Philip K. Dick Trust and the award ceremony is sponsored by the NorthWest Science Fiction Society.  Last year’s winners were EMISSARIES FROM THE DEAD by Adam-Troy Castro (Eos Books) and TERMINAL MIND by David Walton (Meadowhawk Press).  The 2009 judges are Daniel Abraham (chair), Eileen Gunn, Karen Hellekson, Elaine Isaak, and Marc Laidlaw.

For more information about the Philip K. Dick Trust: www.philipkdick.com

Posted by Lou Anders
The SciFiChick has posted her Best of 09 list, and out of 143 books read, Kristine Kathryn Rusch's Diving into the Wreck 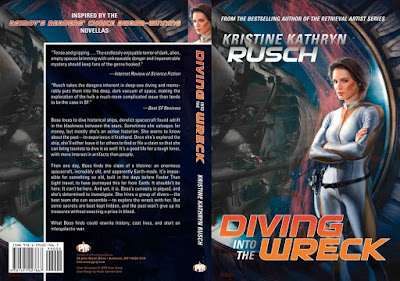 Link to this post
Email ThisBlogThis!Share to TwitterShare to FacebookShare to Pinterest
Labels: Best of, Best of 2009, Diving into the Wreck, Kristine Kathryn Rusch

Here is the list of all the books on which I served as editor (and art director) in my capacity as Editorial Director at Pyr books for 2009.


Chris Roberson, End of the Century

Kay Kenyon, A World Too Near

(Book Two of The Entire and the Rose) (paperback after hc)
Kay Kenyon, City Without End

(Book Three of The Entire and the Rose)

(A Fable of Tonight 3)
Justina Robson’s Chasing the Dragon

(A Trial of Blood & Steel 1)
James Enge, A Crooked Way

(Chronicles of the Raven 2)
Mark Chadbourn, The Silver Skull

(The Sword of Albion)
Kristine Kathryn Rusch, Diving into the Wreck

What a year it's been. I'm proud of every damn one of them, and all my fabulous authors and artists! Thank you all.
at 12:52 PM 0 comments