This week the SF Signal Podcast has an interview recorded live at WorldCon with John O'Neill, founder of Black Gate magazine, and two of the brightest feathers in his cap, Howard Andrew Jones and our own James Enge. Both sold stories early in their career to O'Neill and went on to sell novels based on those characters. James' of course, are the novels of Morlock Ambrosius, his sword and sorcery hero (the latest of which, A Guile of Dragons (A Tournament of Shadows, Book 1),

Podcast host Patrick Hester talks with the three about Middle Eastern culture and fantasy, Tolkien, European-centric fantasy, Sinbad, Disney movies, the history of Black Gate magazine, sword and sorcery, being a short story editor, critiquing, Worldcon and much, much more. It's well worth checking out - funny and informative as the best podcasts are.

A Fair Amount of Coin 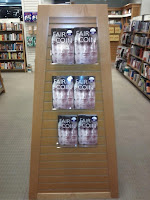 Bookseller Ross Armstrong is a bookseller in Toronto at Indigo's Yorkdale Mall location at 3401 Dufferin St. in north Toronto. He recently popped up on the Fair Coin Facebook page, where he posted the following:


"I have chosen your book to be my CEO 100 choice. If I can sell 100 copies in three months, I get a certificate and a $50 gift card. To date, I have sold 71 copies of your book, Fair Coin, with 5 weeks to go in the three months. In fact, this week I have sold 23 copies alone. The response had been very positive with many purchasers coming back and saying how much they liked the book. Looking forward to Quantum Coin."


We're grateful for booksellers like Ross, and thrilled so many people love this book. Meanwhile, if you are in the Toronto area, you might consider helping Ross get his certificate and gift card.
at 10:21 AM 0 comments

The Blueprint for the Future of Genre Fiction

Yesterday,  Explorations, The BN SciFi and Fantasy blog called the Vampire Empire trilogy "nothing short of the blueprint for the future of genre fiction." Reviewer Paul Goat Allen went on to say that, "And as extraordinary as The Greyfriar and The Rift Walker were, The Kingmakers was arguably the strongest installment of them all: a terrifyingly believable – and brilliantly described –  apocalyptic setting; unforgettable, no, iconic characters; nonstop action and adventure; and, at the heart of it all, one of the most powerful love stories ever written. Clay and Susan Griffith's Vampire Empire trilogy will forever alter the way in which you perceive genre fiction."
at 10:57 AM 4 comments

Link to this post
Email ThisBlogThis!Share to TwitterShare to FacebookShare to Pinterest
Labels: Barnes and Noble, Clay and Susan Griffith, Explorations, steampunk, The Greyfriar, The Kingmakers, The Rift Walker, Vampire Empire, vampires

Over at Boing Boing, Cory Doctor has written a tremendously enthusiastic review of Ian McDonald's Be My Enemy, the follow-up to Planesrunner. Cory writes, "There's a lot more of what made Planesrunner great -- tremendous action scenes, cunning escapes, genius attacks on the ways that multidimensional travel might be weaponized, horrific glimpses of shadowy powers and sinister technologies, but Enemy also has more of what makes McDonald's adult fiction some of the best work I've ever read: a gifted ear for poesie that makes the English language sing, the unapologetic presumption of the reader's ability to understand what's going on without a lot of hand-holding, and a technological mysticism that never explicitly says when the literal stops and the fantasy starts"

Head over to Boing Boing for the full review, but also for a five chapter preview!
at 11:07 AM 2 comments

Link to this post
Email ThisBlogThis!Share to TwitterShare to FacebookShare to Pinterest
Labels: Be My Enemy, Boing Boing, Cory Doctorow, Ian McDonald, Planesrunner

Posted by Lou Anders
This past Labor Day weekend, August 30th to September 3rd, was Dragon*Con, an event that has become the highlight of my convention year, and a show that's becoming like a giant family reunion where even the weird uncles are really cool. For the third year in a row, Pyr has exhibited at the show. We were back in the same spot in the Marriott Marquis Ballroom, in booth 709/711 (yes, we have a huge double booth).

I got up early on Thursday and made the drive to Atlanta, where I was joined by two of parent-company Prometheus Books' employees, Meghan Quinn and Lisa Kay Michalski. Both Meghan and Lisa were embarking on -- not only their first Dragon*Con appearance -- but their first genre convention of any kind! We met in the morning and headed over to the Exhibit Hall to assemble the Pyr booth. We broke for lunch at the Metro Cafe Diner,  where we were joined by authors Sam Sykes, Clay Griffith, and Susan Griffith. Then all six of us went back and assembled the booth. That night saw us eating at (my personal favorite local restaurant, because it's a brewery) Max Lager's, and then out to the Marriott Marquis' High Velocity bar for a very late night. John Picacio, who was in town for just Thursday night to Saturday morning, joined us for the evening. We ended the night around 3am, plenty of time to rest up and still make my 11:30 am panel.

The panel in question was "Gimme a Break--Breaking in and Breaking Out." Like all Dragon*Con panels, it was well attended. The room had 120 chairs and there were at least another 20 folks standing along the back wall. More I couldn't see to count accurately were sitting in the aisles. Afterwards, I raced to the Exhibit Hall for the first day of sales.

2:30 pm was the Pyr Rising panel. I was up on stage with Philippa Ballantine, Andrew P. Mayer, Sam Sykes, K.D. McEntire, E.C. Myers, and (arriving directly from the airport without even checking into his hotel first) Jon Sprunk. The room had a live feed to the World Science Fiction Convention in Chicago, where we were able to see and interact with James Enge and Brenda Cooper. Thanks to the tech crew that made that link happen. It was wonderful to be able to speak to the World Con audience too and to get to see and talk with James and Brenda.

Then it was back in the Exhibit Hall working the booth until 7pm. Followed by another dinner at Max Lager's and another night, this one out until 3:30 am, at High Velocity.  Somewhere in there was a heated and enjoyable discussion of why The Dark Knight Rises sucks (my position) or was brilliant (the opposing side) with comics artist and creator, Ted Naifeh. We found more common ground with discussions of the animated Batman incarnations, but the whole discussion was fun. It was also good to see Hugo-nominated Dan Dos Santos briefly that evening.

Saturday I didn't have any panels, so it was a marathon all-day selling session. We had printed about a thousand Pyr Sampler books as freebies (Update: we printed 2,186!!!). They were GONE GONE GONE by noon. So too was John Picacio, who was in for the morning, then took off to (!) fly to World Con for the Hugo Awards, but at any time we had four or more authors in the booth with us. A special shout out to KD McEntire's husband Jake, who came to the rescue with a portable hotspot when ours went out! Jake saved our bacon. He also proved to be quite a salesman, which really was above and beyond the call. Meanwhile, the crowds at Dragon*Con have to be seen to be believed, and it's incredibly rewarding to see how many people love our books and look for us each year now. The fan interaction the con affords our staff and our authors is just incredible.

For dinner, I went with Sam Sykes, Lisa Kay Michalski, Meghan Quinn, and famous illustrator Todd Lockwood for pizza at Azio Downtown, then back to High Velocity again, where we met up with several of Lockwood's friends, for an evening that we cut short at 2:45 am. Or maybe it was 3am.

And what of our con newbies Lisa and Meghan? They were old pros by the second day, and both were fell in immediately with the vibe of the show. I'm so glad they took to it so well, had such fun working hard, and "got" what Dragon*Con was all about for us. You two are incredible! I hope you can come back next year!

Meanwhile, Sunday was another incredible day in the booth, followed by an 8:30 pm panel called "Editors and Agents Tell All," which was scheduled around the time the Hugo Ceremony in Chicago was starting up. (Apologies for all those nervous glances at my Twitter feed). The panel was just as packed as the previous and a lot of fun to do.

Then it was back to High Velocity, where I had no cell access, no bandwidth, no ability to IM or check Twitter. It was nerve racking, but finally my agent was able to get word to me that "You didn't win. Picacio did." And I was thrilled for my friend John Picacio, one of the top artists of our field, but now officially a Hugo-award winning illustrator!

Sunday night was also the last time the gang was out together. It was a wonderful evening, and a somewhat emotional one as well. Dragon*Con is a marvelous show for us because we have a base of operations in the Pyr booth. We get to interact directly with our readers, by the hundreds, every day and see the effect of what we do has on people. It's a great show because of its attendees, who are all ages and ethnicities and genders, and who are all passionate about science fiction and fantasy in all its permutations. It's such a high energy show, where you work hard and play hard for five straight days. No one ever believes me until they come out--even if they believe me they don't believe me--and they come away enthralled. But what really makes this show is the Pyr family. Jon (and now wife Jenny), Sam, Andrew, Clay, Susan, Eugene, Katie, David, Cooper, Will, Lisa Meghan, Pip, Gabrielle--you are all wonderful.

within a minute of his departure time for the airport. We also sold out books by Sam Sykes, Andrew P. Mayer, Justina Robson, Jon Sprunk, Dave Freer, KD McEntire, and others. What a show. Lisa and Meghan stayed right up until the Exhibit Hall closed, then took off to the airport.

When it ended, Lisa, Meghan, Clay, Susan, Gabrielle, and friends David Alaister Hayden, Cooper Chun, and Will Cockrell and I disassembled the booth and packaged all remaining stock in under an hour - a record! - and went out (sadly sans Gabrielle, who had other plans) to the Landmark Diner, which, since we ate there after take-down last year two, is I suppose a new tradition. And then it was time to say goodbye.

Deep thanks to Regina Kirby, Nancy Knight, Susan Phillips for great programming, and to all the con runners! It was an amazing con. I loved seeing everyone - old friends and new. Cons are made up of people and these people made the con! Emotional things were said, a lot of them late Sunday night, that are simply not for this blog, but I love these people and always will. Thank you all for making this weekend, this magical Brigadoon that calls us all together once a year, one of the best convention experiences ever.