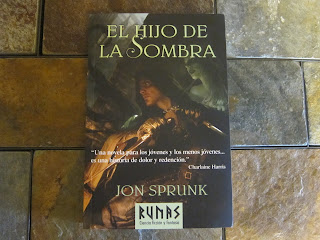 Just received a few copies of the Spanish version of Shadow's Son. With a nice quote from Charlaine Harris on the cover! Me gusto!
at 1:12 PM 0 comments

Shadow's Lure, book 2 of my Shadow Saga, is now available on Kindle. Yay! 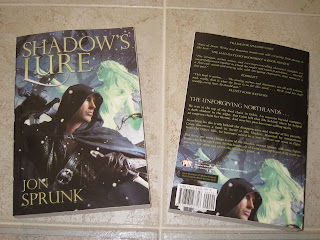 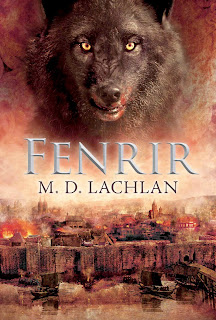 Adventures Fantastic has this to say about MD Lachlan's Fenrir,

and the Pyr brand of fantasy:

"The characters have more depth than most fantasy characters, and Lachlan does a marvelous job juggling a number of major and minor characters, some of whom have multiple names, and making them individuals with their own characteristics, strengths, and weaknesses.  These aren't just static characters, either.  They grow and change, to the point that one or two switch allegiance.... As good as Wolfsangel was, and it was good, Fenrir is better.  If this series continues to improve, it will be a high water mark in contemporary fantasy.  It pretty much is already. Series like this one, the Danilov Quintet by Jasper Kent, the First Law Trilogy by Joe Abercrombie, and the Shadow books by Jon Sprunk, just to name a few fantasy series (and that's not even getting into the science fiction), have made Pyr books my favorite publisher.  With quality like this, it's no wonder Pyr seems to have a permanent place on the shortlists of all the major awards."
at 9:44 AM 0 comments

For Your Viewing Pleasure: The Full Jacket of Planesrunner

There is not one you. There are many yous. There is not one world. There are many worlds. Ours is one among billions of parallel earths.
When Everett Singh’s scientist father is kidnapped from the streets of London, he leaves young Everett a mysterious app on his computer. Suddenly, this teenager has become the owner of the most valuable object in the multiverse—the Infundibulum—the map of all the parallel earths, and there are dark forces in the Ten Known Worlds who will stop at nothing to get it. They’ve got power, authority, the might of ten planets—some of them more technologically advanced than our Earth—at their fingertips. He’s got wits, intelligence, a knack for Indian cooking.
To keep the Infundibulum safe, Everett must trick his way through the Heisenberg Gate that his dad helped build and go on the run in a parallel Earth. But to rescue his dad from Charlotte Villiers and the sinister Order, this Planesrunner’s going to need friends. Friends like Captain Anastasia Sixsmyth, her adopted daughter, Sen, and the crew of the airship Everness.
Can they rescue Everett’s father and get the Infundibulum to safety? The game is afoot!

“Planesrunner is chock-full of awesome. Ian McDonald’s steampunk London blazes on a vast scale with eye-popping towers, gritty streets, and larger-than-life characters who aren’t afraid to fight for each other. The kind of airship-dueling, guns-blazing fantasy that makes me wish I could pop through to the next reality over, join the Airish, and take to the skies”
—Paolo Bacigalupi, Michael J. Printz Award–winning author of Ship Breaker

“Smashing adventure fiction that spans the multiverse without ever losing its cool or its sense of style. Ian McDonald is one of the greats of science fiction and his young adult debut is everything you could hope for: romantic, action-packed, wildly imaginative, and full of heart.”
—Cory Doctorow, author of For the Win
at 10:50 AM 2 comments