Posted by Justina Robson
Well, I haven't posted in a long time. I was away thinking.  Also I played some games.  If you'd like to read more pop over to my actual blog Quantum Gravity.  Meanwhile PYR books keep us all sane and I'm here to wish all of the PYR readers a late but sincere Happy New Year.  Don't stop readin'!
at 7:11 AM 0 comments

Posted by Jon Sprunk
Hey everyone,

I've just received the final cover art for Shadow's Master by Michael Komarck (via the very awesome Art Direction of Lou Anders). Check it out! 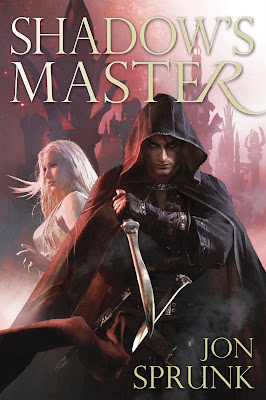 Posted by Lou Anders
Adventures Fantastic have posted a list of "Four Publishers You Should Be Reading in 2012". Pyr made their number one spot. They say:


If you read books from only one publisher in 2012, this is the one you should read.  This is by far the most impressive and innovative line in all SFF publishing, although the others on this list are giving them increasing competition. If you've read many of their books, you understand why editor Lou Anders won the Hugo for Best Editor - Long Form last year.  I've not read a single book published by Pyr that I haven't thoroughly enjoyed, something I can't say about any other publisher.

They also make the following Recommendations:  The Blade Itself by Joe Abercrombie, Twelve by Jasper Kent, Wolfsangel by M. D. Lachlan, Shadow's Son by Jon Sprunk

Link to this post
Email ThisBlogThis!Share to TwitterShare to FacebookShare to Pinterest
Labels: Best of, Best of 2011, Pyr

The Shared DNA of Epic Fantasy and Steampunk

I am not a sociologist.

Normally, this doesn’t really mean anything. I’m not a lot of things. I’m not a firefighter, or an accountant, or a Buddhist, or an anarchist, or a zucchini. Normally, these are all of about equal relevance.

In this case, however, the fact that I’m not a sociologist matters a little, since what I’m suggesting dips a toe into those waters. But I’m going to speculate anyway, and if I’m way off base, well, it wouldn’t be the first time.

(It would, in fact, be the seventh. I have been wrong exactly seven times in my life. Or eight, if you count this assertion.)

Anyway, all of this is just me dithering aimlessly, so enough of that. It’s time to dither with purpose.

Trends and tastes in entertainment tend to rise and fall in cycles. Something’s popular for a while, falls out of popularity, the pendulum swings back and it comes back for a while, and so forth. Some details my change. Maybe sword-and-sorcery fantasy is popular during one surge, whereas sweeping epics are dominant in the next (Not that such things can’t both coexist, of course; I’m just talking trends being more or less common.) The details may change, but the core aspect of a genre/style/whatever—and the purpose it serves for its particular audience—returns.

My hypothesis, after giving it some thought, is this: The surge in popularity of steampunk over the last decade or so is an upswing in the same cycle that gave us the popularity of epic fantasy from the 70s to the 90s. Not similar. Not related. They are the same cycle and fill the same needs for the speculative fiction audience; only the cosmetic details have changed.

Yes, you now think I’m crazy. Steampunk and high fantasy are pretty far apart on the spec-fic continuum, and when most people do look for connections, they suggest a much closer link between steampunk and sci-fi than between it and fantasy (due, in part, to the reliance on technology).

And you’d be right, I am crazy. But not because of this.

A Portion of the Continent of Laent

Posted by Lou Anders
James Enge's Morlock the Maker stories and novels take place on the continent of Laent, a land on a world much different from our own. For one thing, the world is flat, and for another, the sun sets in the east. For the novel This Crooked Way,

illustrator Chuck Lukacs, who apart from being a brilliant illustrator is also the creator of Fantasy Genesis: A Creativity Game for Fantasy Artists,

provided us with a map of a portion of that world. I've always loved the "Tolkien meets Led Zeppelin" feel of Chuck's map. For more about Morlock and his world, you can always read 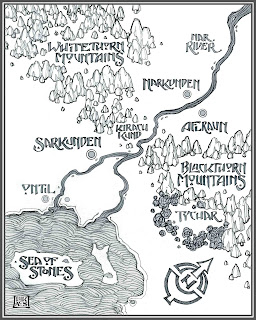