A perfect tale for Halloween

Posted by Lisa Kay
Halloween is almost here, and there's nothing better than a supernatural story to get you in the mood!  If you crave something other than witches and vampires and werewolves (oh my!) then Barbara Barnett's debut The Apothecary's Curse might be just what you're looking for. Rene Sears, editorial director of Pyr, recently chatted with Barbara about her writing style and inspiration behind this tale of the true price of immortality.  Read on for more!

The lives of two men become entwined for centuries after an apothecary creates an elixir from an ancient manuscript. Physician Simon Bell and apothecary Gaelan Erceldoune are able to conceal their immortality, but the only hope for reversing their condition rests with the now missing manuscript. When a modern-day pharmaceutical company unearths diaries that could lead them to the fabled "elixir of life," Simon and Gaelan must race to find the manuscript before their secret is discovered. 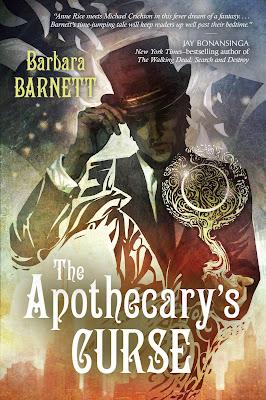 Rene Sears: I love the way the story in The Apothecary's Curse weaves through two timelines. What led you to such a that structure rather than a more linear timeline?

Barbara Barnett: My original road map told the story in a much more straightforward linear narrative. But as I wrote, two things happened. One, I realized I had to either do a very long time jump from 1842 to the modern-day story or fill in the story of the intervening years more fully, which would have led to quite a different (and much longer) novel than I desired. Second, as I developed the relationship between Gaelan and Anne Shawe, I began to see parallels with his Victorian-era story and I wanted to really explore that. So rather than keep it linear, I thought it would be much more interesting to integrate the two storylines, revealing both simultaneously.

In the book, a geneticist speculates about human immortality in relation to Turritopsis dohrnii, the immortal jellyfish. How did you come to be interested in the jellyfish, and how did it relate to the genesis of some of your ideas for this book?

I knew I didn’t want the immorality to be explainable only by some sort of magic event. That would never do for my skeptical hero Gaelan Erceldoune! He would say that all magic is simply science we did not yet understand, so I had to find science that might explain his immortality.

My undergrad studies were in biology and chemistry, and I have always been fascinated with genetics. So when I came across the 2009 Nobel Prize-winning research on the “immortal” jellyfish and its telomeres, I thought I’d hit on something that could play very well in my story. How can the jellyfish be immortal? Its extraordinarily sturdy telomeres (the chromosome end-caps, more or less) keep the keep the chromosomes from deteriorating and the jellyfish from aging. So, my fictional geneticist’s research is based upon the Nobel work and fueled by her family’s genetic history. 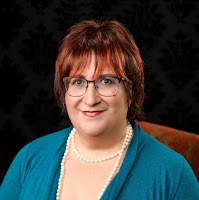 What goes into your writing process, and do you outlines before you write or discover as you go? Apothercary's Curse has such wonderful mood and atmosphere; I also wondered if you write to music, and if so, do you have a playlist for the book?

I tend to write road maps rather than hard and fast outlines. I keep in mind the classic “three-act” structure and put bullet points just under the chapter headings so I know where I want to go by the time I’ve gotten through a chapter. Beyond that, I really like the journey of discovery along with my characters. I started The Apothecary’s Curse with a fairly detailed road map, and then my characters took on a mind of their own, but even so, every time I got stuck or lost in the journey, my outline guided me back to where I wanted to be, at least in broad strokes.

As far as writing to music goes, I’m a professional singer, and when I have music in the background, I get distracted and listen to the music. So I generally do not listen to music while writing. However, I was listening to music when I wrote the Simon’s first scene visiting Bedlam. I was listening to Mozart’s Requiem, and when I went back to re-read, I was stunned by the sheer number of musical metaphors that had found their way into that scene!

The scenes in Bedlam seem really appropriate this close to Halloween! We'd love to know any scary details you came across about Bedlam in the course of your research.

Bedlam was in itself a scary place—especially for the poor wretches sent there. I thought it was interesting that in the pre-psychiatry days, the doctors treating mental illness were called mad doctors. Apothecary’s “mad doctor” really is a mad doctor. So many of the treatments used there would now be considered extreme torture, and if a person wasn’t insane when admitted to Bedlam, he or she surely would be in short order. Horrendous experimentation on patients was common as were “freak shows” not unlike to which Gaelan was subjected. Many died at the hands of Bedlam’s mad doctors and were buried in mass graves on the grounds.

And finally, particularly as you have written extensively and analytically about television shows, I'd like to hear what shows you're watching. :)

My favorite shows right now are Game of Thrones on HBO, Poldark (season two is upon us!) on PBS, Man in the High Castle on Amazon (I’m a huge Philip K. Dick fan, and I adore alternate history stories). The newest one on my screen is Designated Survivor with Kiefer Sutherland. I was not a big fan of 24, but I really liked the first episode a lot.

I watch Once Upon a Time, though not as intensely as I did during its first couple of seasons. I adore the mashups of fairy tale and mythology, and I liked their original take on Rumplestiltskin (yes, it’s spelled that way on the show!), especially as portrayed by Robert Carlyle (who would make a fantastic Gaelan Erceldoune, by the way!) but I think the show’s gotten a bit away from the original concept over the last two seasons, but I’ll keep watching and hoping.

I’m a politics junkie, so cable news is often my writing white noise, while Real Time with Bill Mahler and Last Week Tonight with John Oliver (both on HBO) are appointment TV for me.