Posted by Lou Anders
The nominees for the 2012 Sunburst Award for Excellence in Canadian Literature of the Fantastic have been announced. We are very excited to see that K.V. Johansen's Blackdog is a nominee in the adult category.


The Sunburst jury says this about the book: "Blackdog is everything high fantasy should be: a tale of wars among gods, demons and wizards that also works as an oddly compelling social-cultural coming-of-age novel. The Blackdog has, through a multitude of incarnations, protected the living goddess, Attalissa, who manifests in the world as a human. This time, over many years, she is driven away from her power-giving lake and grows up among the caravanserai of her new Blackdog, the caravan guard Holla-Sayan, and learns to be a more moral human/god. The characterizations of the young girl and her anguished, shape-shifting protector, as well as other gods, friends, and a demonic enemy, are profound & moving. This is a strongly imagined fantasy world, its peoples rendered with both wit and insight."


The Sunburst Award for Excellence in Canadian Literature of the Fantastic is a juried award to recognize stellar writing in two categories: adult and young adult. The awards are presented annually to Canadian writers with a speculative fiction novel or book-length collection of speculative fiction published any time during the previous calendar year. Named after the first novel by Phyllis Gotlieb (1926–2009), one of the first published authors of contemporary Canadian science fiction, the awards consist of a cash award of Cdn$1,000 and a medallion which incorporates a specially designed "Sunburst" logo. The winners receive their awards in the fall of every year.
at 12:16 PM 0 comments 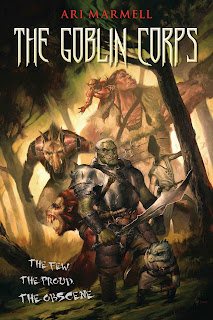 ASFA, the Association of Science Fiction and Fantasy Artists, have released the finalists for the Chesley Awards. The cover artists for three Pyr novels are finalists in the category of Paperback Books:

Justin Gerard for Hearts of Smoke and Steam

by Andrew P. Mayer
Lucas Graciano for The Goblin Corps

The Chesley Awards were established in 1985 by the Association of Science Fiction and Fantasy Artists to recognize individual artistic works and achievements during a given year. The Chesleys were initially called the ASFA Awards, but were later renamed to honor famed astronomical artist Chesley Bonestell following his death in 1986. The awards are presented annually at the World Science Fiction Convention.

Congratulations to all the nominees!

Clay and Susan Griffith on USAToday's Happily Ever After 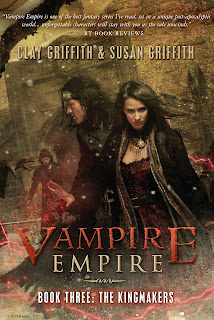 Clay and Susan Griffith, authors of the Vampire Empire trilogy, joined the USAToday's Romance Blog, Happily Ever After, for a video interview. Check it out:


The third book in the trilogy, The Kingmakers, is coming this fall. The Greyfriar and The Rift Walker are available now.
at 10:03 PM 0 comments

Link to this post
Email ThisBlogThis!Share to TwitterShare to FacebookShare to Pinterest
Labels: Clay and Susan Griffith, Vampire Empire 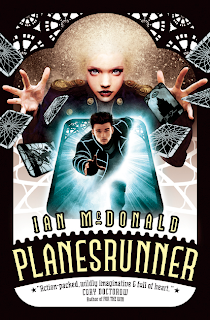 This year's nominees for the Sidewise Award for Alternate History have just been announced. We are very excited to find Ian McDonald's Planesrunner, one of our first young adult offerings, nominated in the category of Alternate History, Long Form.   The winners will be announced at Chicon 7, this year's Worldcon, in Chicago, Illinois during the weekend of August 30.  This year's panel of judges was made up of Stephen Baxter, Evelyn Leeper, Jim Rittenhouse, Stu Shiffman, Kurt Sidaway, and Steven H Silver.

Congratulations to Ian McDonald and all of the nominees.

The Sidewise Awards for Alternate History were conceived in late 1995 to honor the best allohistorical genre publications of the year. The first awards were announced in summer 1996 and honored works from 1995. The award takes its name from Murray Leinster's 1934 short story "Sidewise in Time," in which a strange storm causes portions of Earth to swap places with their analogs from other timelines.
For more information, contact Steven H Silver at shsilver@sfsite.com or go to http://www.uchronia.net/sidewise.
at 2:59 PM 0 comments