More Books Than You Can Shade a Stick At

Posted by Lou Anders
I've spoken recently on here and around the net about several acquisitions.  So you may have heard about Clay & Susan Griffith's marvelous Vampire Empire trilogy, an alternate history novel which blends pulp adventure with romance and a touch of steampunk. (Think swashbuckling with bloodsuckers across a fleet of flying airships). I've hinted at The Buntline Special, Mike Resnick's first foray into the Weird West (think steampunk OK Corral with zombies. The interior illustrations, by Seamas Gallagher, are already in and can I just say, "wow!") And you've heard about Jasper Kent's historical Russian fantasy, Twelve, (and it's sequel, Thirteen Years Later), a vampire novel that brings the monsters back to their, well, monstrous roots, and does so against Napoleon's invasion of Russia. We've also talked about Mark Hodder's Burton & Swinburne in The Strange Affair of Spring-Heeled Jack, a brilliant piece of alt history Victoriana that does what a lot of books which use the iconography of steampunk fail to do, and that is think out its whole world as an amazing exercise in uchronia where every set piece has been built up as a naturally-occurring result of the one before, all the way back to the moment of change between their world and ours. And, of course, you may have seen on Twitter where we are gearing up to publish Legends of the Raven, the second "Raven" trilogy from James Barclay.

Well, those weren't the only titles I was busy acquiring. I can now tell you about: 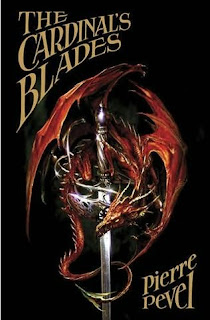 Pierre Pavel's The Cardinal's Blades, a fantastic bit of swashbuckling historical fantasy slash swords and sorcery that I am head over heels about.

Welcome to seventeenth century Paris, where intrigue, duels and spies are rife and Cardinal Richelieu’s men may be prevailed upon to risk life and limb in the name of France at a moment’s notice. And with war on the horizon, the defense of the nation has never been more pressing.


Danger is rising from the south—an insidious plot which could end with a huge dragon- shaped shadow falling over France. A shadow cast by dragons quite unlike the pet dragonets which roam the cities like stray cats, or the tame wyverns men ride like horses, high over the Parisian rooftops. These dragons and their descendants are ancient, terrible and powerful... and their plans contain little room for the lives or freedom of men.


Cardinal Richelieu has nowhere else to turn; Captain La Fargue and his elite group of men, the Cardinal’s Blades, must turn the tide. They must hold the deadly Black Claw cult at bay, root out traitors to the crown, rescue prisoners, and fulfill their mission for the Cardinal, for their country, but above all for themselves.


It’s death or victory. And the victory has never been less certain.


The Author, Pierre Pevel, is one of the foremost writers of French fantasy today. The author of seven novels, he was awarded the GRAND PRIX DE L'IMAGINAIRE in 2002 and the PRIX IMAGINALES in 2005, both for best novel. (The image here is from the UK edition, but we've already contracted with our friend and fantastic artist Jon Sullivan to use the same image. Why tamper with perfection?)

And building on his success with The Quiet War (and the expected success of the forthcoming sequel Gardens of the Sun), we've gone back and picked up Paul McAuley's absolutely fabulous Cowboy Angels, because, dammit, American's need to read this one too:


America, 1984 - not our version of America, but an America that calls itself the Real, an America in which the invention of Turing Gates has allowed it access to sheaves of alternate histories. For ten years, in the name of democracy, the Real has been waging clandestine wars and fomenting revolution, freeing versions of America from communist or fascist rule, and extending its influence across a wide variety of alternate realities. But the human and political costs have proven too high, and new President Jimmy Carter has called an end to war, and is bringing troops and secret agents home. Adam Stone is called out of retirement when his former comrade, Tom Waverly, begins to murder different versions of the same person, mathematician Eileen Barrie. Aided by Waverly's daughter, Linda, Adam hunts for his old friend across different sheaves, but when they finally catch up with Waverly, they discover that they have stumbled into the middle of an audacious conspiracy that plans to exploit a new property of the Turing Gates: it will change not only the history of the Real, but that of every other sheaf, including our own. Cowboy Angels combines the high-octane action and convoluted plots of the TV series 24 in a satirical, multi-layered alternate reality thriller.


(As we speak, Sparth is at work on the cover.)

Now if you have really been paying attention, you may already know that we have signed debut author Sam Sykes's fantasy trilogy, The Aeon's Gate, which begins in 2010 with Tome of the Undergates. The forthcoming UK edition is already generating huge buzz (but you'll wait for our edition, yes?) The book is tremendous, and sits tonally very nicely between Joe Abercrombie and Scott Lynch. It's 180,000 words of action and great character banter that hits hard from chapter one and doesn't let up. Here's the description: 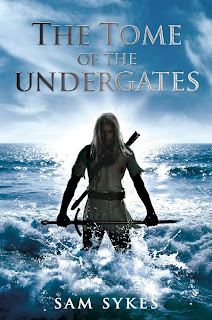 Lenk can barely keep control of his mismatched adventurer band at the best of times (Gariath the dragon man sees humans as little more than prey, Kataria the Shict despises most humans, and the humans in the band are little better). When they’re not insulting each other’s religions they’re arguing about pay and conditions.

So when the ship they are traveling on is attacked by pirates things don’t go very well. They go a whole lot worse when an invincible demon joins the fray. The demon steals the Tome of the Undergates – a manuscript that contains all you need to open the undergates. And whichever god you believe in you don’t want the undergates open. On the other side are countless more invincible demons, the manifestation of all the evil of the gods, and they want out.

Full of razor-sharp wit, characters who leap off the page (and into trouble) and plunging the reader into a vivid world of adventure this is a fantasy that kicks off a series that could dominate the second decade of the century.


Finally, we've just shook hands yesterday afternoon with Ari Marmell on his brilliant fantasy novel, The Goblin Corps, a very dark and very humorous novel where the bad guys are the protagonists. The novel follows a squad of goblin soldiers--an orc, a troll, a kobold, etc.--during what might be the final days of an evil empire facing attack from the combined forces of humanity and the other “good” races. I cannot begin to communicate how excited I am by it. But those looking for a taste of Ari's writing can check out The Conqueror's Shadow, coming this February 2010 from Bantam Spectra. The Library Journal describes it thusly: "Superior storytelling and deft dialog make this a top-notch choice for fans of Glen Cook and James Barclay." Works by me.