Posted by Lou Anders
Fantasy Book Critic is holding a contest. Twenty lucky winners will be awarded an advance reading copy of Joe Abercrombie’s fantasy debut The Blade Itself.

The USA release date for The Blade Itself is September 30, 2007 and in support of the book, readers can look forward to a review and an interview with author Joe Abercrombie from Fantasy Book Critic in late August/early September. Giveaway ends Friday, July 27, 2007 – 11:59AM PST.

Meanwhile, here is the final full jacket of the book. This was composed by Jaqueline Cooke, following the original design by Laura Brett. Astute readers will notice font changes from the UK edition, though we share the letter "h." Also the final printed version will see gold foil used to limn the title and author's name, with the arrow design and the words "the first law: book one" in solid foil. 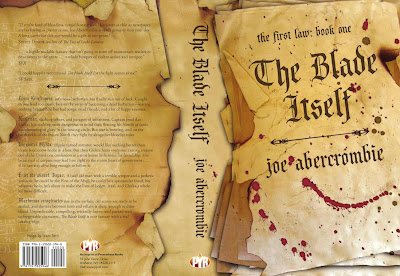 "If you're fond of bloodless, turgid fantasy with characters as thin as newspaper and as boring as plaster saints, Joe Abercrombie is really going to ruin your day. A long career for this guy would be a gift to our genre."- Scott Lynch, author of The Lies of Locke Lamora
at 12:31 PM

Email ThisBlogThis!Share to TwitterShare to FacebookShare to Pinterest
Labels: Blade Itself, Contest