The Wolf Age is the third novel to feature Enge’s character Morlock Ambrosius, a wandering swordsman, an exile, and a drunk. Blood of Ambrose, Enge’s first Morlock novel, was on the Locus Recommended Reading list and a World Fantasy Award nominee for Best Novel.

“I'm honored to be Pyr’s centenarian (or centurion?),” Enge says. “Between that distinction and the World Fantasy Award nomination for Blood of Ambrose, it's been a pretty cool fall. Both the WFA nominees and the authors on the Pyr list are pretty impressive company; it's a privilege to be counted among them.”

Publishers Weekly gave The Wolf Age a starred review, calling it “harrowing and beautiful” and noting that “Enge's elegant prose perfectly captures Morlock's terse and morbid nature, which thrives in the vicious, honorable werewolf nation. Numerous intimate, complicated, and contentious relationships provide depth and gravity to the grim tale, which will enthrall fans of the dark and sinister.” 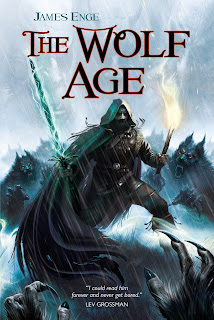 All of Enge’s Morlock Ambrosius novels and stories can be read independently, but—as Tim Pratt recently pointed out in his Locus review of The Wolf Age—reading one will make you want to seek out the others. Calling The Wolf Age “inventive and delightful,” Pratt “promptly tracked down the earlier titles, Blood of Ambrose and This Crooked Way, because I enjoyed this one so much.” He added, “Enge is one of the most engaging of the new sword and sorcery authors, and I hope we get to follow Morlock's exploits for a long time to come.”

In honor of this burgeoning Morlock fan base, and to commemorate The Wolf Age’s status as Pyr’s one-hundredth title, Pyr is issuing a free, exclusive, ePub novelette called "Travellers' Rest." Featuring a cover by artist Chuck Lukacs, “Travellers' Rest” is an 8,500 word original novelette, written for Pyr, which takes place before the events of Blood of Ambrose. It is available on the Pyr website, http://www.pyrsf.com, as a free download in ePub format and will also be available via Kindle. (Two previously published Morlock short stories that take place many decades after the events of The Wolf Age—“A Book of Silences” and “Fire and Sleet” —are available on the Sample Chapters section of the Pyr website.)

Enge describes “Traveller's Rest” as “a story that's been trying to chew its way out of my head for a while now, and this seemed like a good time to release it as an introduction to Morlock. Also, Morlock’s apprentice Wyrth has a small but discerning fan base, and ‘Traveller's Rest’ gives them a chance to encounter him again.”

Pyr has been called “one of the most exciting publishers in the business” by Black Gate magazine. It was launched in March of 2005 by Prometheus Books, an independent publisher of quality nonfiction based in Amherst, New York.