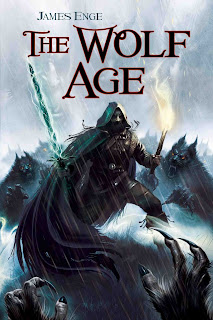 James Enge  drops by Suvudu to share five facts about his forthcoming novel, The Wolf Age

. See "Take Five with James Enge" for  what powers a magical zeppelin and why the Grateful Dead are cool. Meanwhile, Sam Sykes, author of Tome of the Undergates

, answers "8 Shoddy Questions" on SFFNews today, including #8, "Who would win in a fight between a Koala Bear and a Wombat?" Sam was also recently featured on John Scalzi's The Big Idea, in which he explained that "crotch stompin'" was just the icing on the cake in his examination of what it truly means to be an adventurer. And Twelve

author Jasper Kent has an excellent interview up at Pat's Fantasy Hotlist.

Meanwhile, here's what they are saying about our books:

by Ian McDonald:  “McDonald flawlessly weaves the different characters and plotlines together with a masterful touch as he draws upon current events to chart the probable future of Turkey. The protagonists are fully developed against the backdrop of the vividly imagined city of Istanbul while emerging technology holds the potential to change everything. Sci-fi just doesn’t get much better then this.” -Monsters and Critics, September 25, 2010

by James Enge: “Blood of Ambrose is slick, weaving a dark tale of despair and death as our heroes struggle to save their kingdom and, as the book moves forward, the entire continent as a darker and far more dangerous adversary is revealed. Enge’s style is more show than tell and for Blood of Ambrose this works magically as the Two Cities of the Ontilian Empire seem to breathe life throughout the pages…It seemed too soon when I reached the end, so well had Enge penned this barbaric and epic tale. I fully understand now why the book was recently nominated for Best Fantasy Book of the Year.”-Shiny book Review, September 16, 2010

by Joe Abercrombie: “Three days of rabid reading later, if there is one word that should unequivocally never, ever be used to describe The Blade Itself, that word would be ordinary. This is the type of book that spoils you, the kind of book that makes nearly everything else on your bookshelf look mediocre, the kind of thing that could forever wreck “ordinary” fantasy for you…Maybe my inner geek is showing, but reading The Blade Itself put me a little in the mind of watching the original Star Wars movie.” ​-The Little Red Reviewer blog, September 21, 2010

by Pierre Pevel: “…this is a wildly entertaining read with delightfully broken characters. Were I ten again, I'd be running around the park with sticks, pretending to be the half-dragon Saint-Lucq. Also like Dumas, The Cardinal's Blades isn't "great literature" - there aren't deeper themes or higher ideals at stake: this is a book of swashbuckling excess, and should be celebrated as such.” -Pornokitsch.com, September 17, 2010
at 10:42 AM