A Brief History of Lenayin 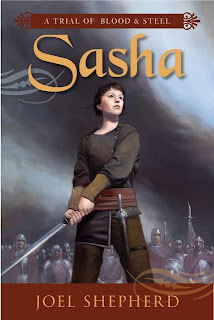 I've written a post on my blog about the world building that went into the land of Lenayin, from my novel 'Sasha'. Rather than posting the whole thing here, I've put in a link, and an excerpt.

'I can’t think of many fantasy novels where the people live beneath the rule of a king, but are ambivalent toward him and his authority. Because fantasy novels tend to be in love with the power of kings, and in love with the feudal system that sustains it... and sure, there is a lot of romance surrounding a position of such extreme authority. But the reality of such systems, of course, is that much of what we perceive as romance from that period of European history (picture glamorous king in crimson cloak on prancing white steed), was in fact propaganda by those kings who wanted to make themselves look good, and semi-divine, for obvious reasons.

Though power itself can be glamorous, much of the romance surrounding that power was in reality bullshit, and much of the manner in which kings actually ruled was cruel, arbitrary and unenlightened, to put it mildly. A good king could certainly be better than a bad king, but the system itself doesn’t allow much of what we would consider today ‘liberal open mindedness’ -- you’re either loyal, or you’re dead, and that applies to those living beneath good kings and bad kings alike. George RR Martin is one fantasy author who grasps this extremely well in ‘A Song of Ice and Fire’. But a lot of fantasy, sadly I think, tends to swallow the propaganda whole, because the propaganda is pretty. Perhaps this just goes to illustrate that there is a statue of limitations on the offense caused by nasty political systems. Fantasy writers glorifying Nazism would get into trouble. Feudalism, not so much.