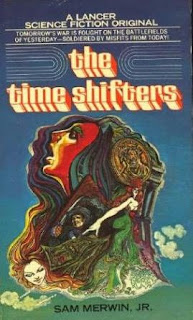 Sorry for going all Austin Powers on you in the title line there; but I thought I'd do some more leavening of Lou's blog-mission. He seeks to bring you SF excellence; I seek to balance that with examples of books that are, shall we say, differently-excellenced. There's today's example, top-of-post, with its ungainly blob-of-psychedelia cover design (a sort of cover that seems to me terribly characteristic of its era): Sam Merwin, Jr.'s The Time Shifters (1971).

It's a splendid little book, actually: pretty much bad from start to finish, but gloriously bad, all spun from a nicely batty premise. Its characters travel through time using high-tech ‘passports’, but in addition to the usual toing-and-froing, grandfather paradoxing and so on, we discover that one side-effect of time-travel is to make the traveller fantastically randy, which enables Merwin to fill most of the book with descriptions of pneumatic sex. What does it feel like to travel through time? ‘It was a fierce, rutting, animal instinct, that of a caveman under a full moon’ [73]. The results make conventional sex seem tame: ‘She kissed him then, and the touch of their loins drew sparks’ [101]. Ouch. Other choice stylistic moments:

‘He ran the light-blue eyes up and over his nephew’s massive person.’ [6]

‘It sounded like a hen laying an egg. Uncle Phil had a hideous laugh.’ [7]

‘The brandy [was] decanted from a pharmacist’s jar labelled Denatured Alcohol, the soda from an aerated keg lettered Liquid Sodium.’ [51]

‘Paula moved like a wraith with a hotfoot, grabbed Chuck by the wrists and spun both of them through an arched opening in the hedge.’ [59]

‘He received an impression of a small sea of featureless pink faces staring at him in wide-eyed astonishment.’ [69]

‘At that moment his libido seemed to have gone into reverse.’ [73]

‘Finding that my new love is my great-grandfather, however happenstantially, requires a certain amount of getting used to.’ [94]

‘Considering this horrid fact, he drained his vodka and soda and motioned to Mullarney to shove up another sheep.’ [95] [Since Mullarney is the barkeep, this is a cocktail, I presume; although it’s not exactly clear in the text]

‘She compressed her luscious African-American lips and shook her head, causing her pigtails to fly in circles behind her ears. “Maybe you need another kind of therapy.”’ [99]

‘It’s …the long accepted theory that a man who could travel faster than light could spin off this planet for a light year or two and return that much younger.’ [172]
at 7:31 AM