For Your Viewing Pleasure: The Silver Skull 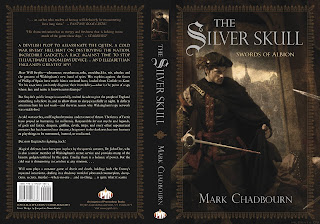 A devilish plot to assassinate the queen, a cold war enemy hell-bent
on destroying the nation, incredible gadgets, a race against time
around the world to stop the ultimate doomsday device...
and Elizabethan England's greatest spy!


Meet Will Swyfte—adventurer, swordsman, rake, swashbuckler, wit, scholar and the greatest of Walsingham's new band of spies. His exploits against the forces of Philip of Spain have made him a national hero, lauded from Carlisle to Kent. Yet his associates can barely disguise their incredulity—what is the point of a spy whose face and name is known across Europe?   But Swyfte's public image is a carefully-crafted façade to give the people of England something to believe in, and to allow them to sleep peacefully at night. It deflects attention from his real work—and the true reason why Walsingham's spy network was established.   A Cold War seethes, and England remains under a state of threat. The forces of Faerie have preyed on humanity for millennia. Responsible for our myths and legends, of gods and fairies, dragons, griffins, devils, imps and every other supernatural menace that has haunted our dreams, this power in the darkness has seen humans as playthings to be tormented, hunted or eradicated. But now England is fighting back!   Magical defences have been put in place by the Queen's sorcerer Dr. John Dee, who is also a senior member of Walsingham's secret service and provides many of the bizarre gadgets utilised by the spies. Finally there is a balance of power. But the Cold War is threatening to turn hot at any moment...   Will now plays a constant game of deceit and death, holding back the Enemy's repeated incursions, dealing in a shadowy world of plots and counter-plots, deceptions, secrets, murder, where no one... and no thing... is quite what it seems.
at 10:37 AM