Starting With the World 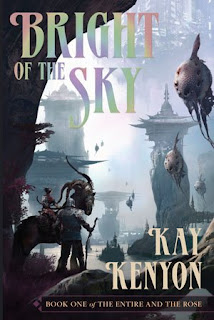 I've been thinking about what door you use to find a story. I've heard writers say they start with character or with a science idea. Both are great jumping off points. But I start with the world.

Where will I take the reader? What milieu, what setting, what geography? In science fiction this question has obvious utility, but it's also a good question for mainstream stories, whether set in a circus, a law firm, or the arctic.

Beginning your story search with milieu can kick-start the whole novel, opening a door onto character, society, theme and science. I began with world building for Bright of the Sky. I asked where a galactic-scale story could happen if I didn't want to use space travel. The answer came, a parallel universe. Fine. And then the triggering idea: what if the universe had a shape? Thus began my discovery of the Entire, a tunnel universe with walls and a lid of fire for a sky.

After this, the other story pieces cascaded into place. It seemed as though there was an Entire, and I was uncovering its history. Who enters this universe as a stranger? Who built the place? Why? If it is infinitely large, how do the inhabitants travel? What culture would have evolved?

I've launched other novels from the world. Earth is covered with a crystal calculating matrix. (Maximum Ice.) Terraforming is failing, and the planet is reverting to what it used to be (Rift.)

Some characters will be especially challenged by being strangers in a specific place. These folks make excellent additions to your cast. Also, certain characters must exist in your milieu. If the world is as big as a galaxy, and if the mode of travel is upon a never-ending river, wouldn't there be a special role for river pilots? If you want to get analytical (let's)-- it makes sense that character is shaped by place. Desert, mountain, sea, the American deep South--these places spawn life-views, attitudes and cultural imperatives. Therefore, culture, too, may flow from place, from the very geography. In Dune, the culture arose from the desert, as surely as the prickly pear cactus from our own Southwest.

And so on, down the basic components of story, all springing from the soil, the unique physicality of place. And it makes a lovely answer when people ask you where you get your weird story ideas: From the land. Then smile enigmatically.
at 1:31 PM

Email ThisBlogThis!Share to TwitterShare to FacebookShare to Pinterest
Labels: Bright of the Sky, milieu, World-Building