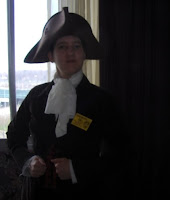 Jacinta Meyers is an Assistant Editor in the editorial department of my parent company, Prometheus Books. Last weekend, she attended EerieConX, a small convention put on by the Buffalo Fantasy League. The con was held April 18 - 20, 2008, at the Days Inn in Niagara Falls, New York. Given the convention's proximity to my dark masters, I am thinking about EerieCon myself for next year. Meanwhile, Jacinta kindly agreed to act as Pyr's goodwill ambassador this time, shouldering the burden of lugging a large stack of Pyr bookmarks, catalogs and (very popular) sampler books along with her. She has also provide us with the following con report. And so, without further adieu, here's Jacinta:

EerieConX. When we walked through the doors of the Days Inn at Niagara Falls, we weren't sure that it was even the right hotel. It was quiet, no one dressed in crazy costumes or standing around with cups of coffee chatting about advanced astrophysics, Star Trek, or Isaac Asimov. In fact, there weren't very many people around at all. Then, over by the desk, we saw the sign: ErieConX, registration downstairs. Making our way down, we were given our badges, programs, and convention booklets. Then began one of the smallest and most authentic conventions I have ever been to. 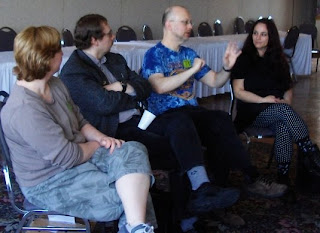 About a hundred fans of sci-fi, fantasy, and horror turned out for the weekend-long event. With such few people, there was a real quality of camaraderie that you just can't get at massive cons. Some of the panels drew such small audiences that we spoke on a first-name basis with the guests of honor. And there were several: Sephera Giron, Carl Frederick, Joe Haldeman, Nancy Kress, John-Allen Price, Rob Sawyer, Caro Soles, Edo van Belkom, and Jennifer Crow, to name just a few. Panel topics included diversity in the field of genre publishing, habitable planets in the universe, and such practical things as how to hire an agent and how to balance one's life around writing. There were the staples of fantasy and sci-fi conventions - a small dealer's room and art gallery. And then there were the activities you can't see anywhere else: a hilarious game of "Which line's mine?" where the published author-guests have to correctly identify which lines from written works are their own. There was a room showing movies, shows, and animes all weekend, and a gaming room complete with Dance Dance Revolution mats. 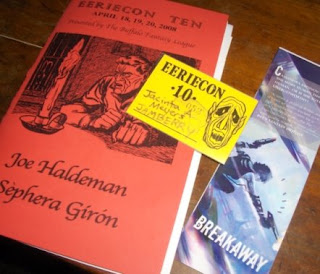 What surprised me the most about this hometown convention was the diversity. There were people from all over the US and Canada, of every age and orientation, from every class and education level. Accordingly, the convention programmers had set up many different kinds of interesting panels, with presenters like David DeGraff, professor of astronomy and physics at Alfred University, and space physicist David Stephenson. We had discussions on everything from what weather would be like on giant gaseous planets, to Caesar's military logistics. Authors at one panel spoke about good horror writing while others discussed how to escape over-used clichés in fantasy writing. There was truly something for everyone. 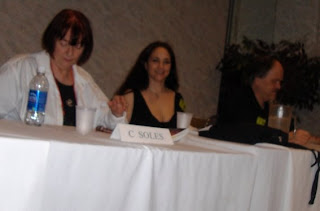 The only real criticism I would have is for the convention programmers. While they did an awesome job with the panel topics and set-up, there were so many panels going on all over the hotel at the same time. We often had to try and decide between two or even three equally interesting panels to attend. Authors kept complaining that there was not enough time to get from the top floor to a panel on the bottom level, and there were no breaks in between. The hallway with the drinks and snacks bar was often crowded, with stuffed chairs and tables blocking movement from the elevators and bathrooms to the different rooms with activities. Perhaps if the planners considered a yearly overall theme, or shortened each panel to 45 minutes rather than a whole hour, to give authors fifteen minutes to answer questions, pose for pictures, or just get from one floor to another, the convention may be a little less chaotic.

Nevertheless, this editor has definitely marked her calendar for EerieConXI next year. Maybe I'll see you there!