For Your Viewing Pleasure: The Alchemist in the Shadows

Posted by Lou Anders
The Alchemist in the Shadows 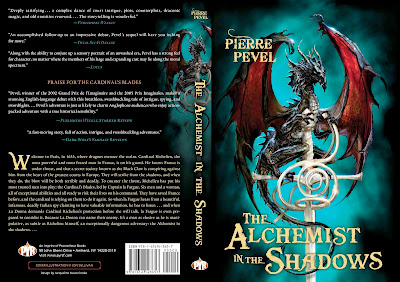 Welcome to Paris, in 1633, where dragons menace the realm. Cardinal Richelieu, the most powerful and most feared man in France, is on his guard. He knows France is under threat, and that a secret society known as the Black Claw is conspiring against him from the heart of the greatest courts in Europe. They will strike from the shadows, and when they do the blow will be both terrible and deadly. To counter the threat, Richelieu has put his most trusted men into play: the Cardinal's Blades, led by Captain la Fargue. Six men and a woman, all of exceptional abilities and all ready to risk their lives on his command. They have saved France before, and the Cardinal is relying on them to do it again.

So when la Fargue hears from a beautiful, infamous, deadly Italian spy claiming to have valuable information, he has to listen ...and when La Donna demands Cardinal Richelieu's protection before she will talk, la Fargue is even prepared to consider it. Because La Donna can name their enemy. It's a man as elusive as he is manipulative, as subtle as Richelieu himself, an exceptionally dangerous adversary: the Alchemist in the shadows ...
at 10:53 AM