Further Thoughts on eReader apps for the iPad

Yesterday, Barnes and Noble released their much-anticipated, long-awaiting B&N eReader app specifically for the iPad. With its arrival, there are now three excellent eReading options, and as a user of all three, I though a follow up to my "My Life in eBooks" post might be due. (I haven't downloaded the Kobo app yet, due to early reports of bugs, so that one isn't addressed but may follow in later report).

I've been reading for the two plus months on the iPad, mostly in iBooks but also in the Kindle for iPad app. But before the iPad I had read a whole novel - Fritz Leiber's Swords & Deviltry - in the B&N iPhone app, which was my favorite of the iPhone reading apps for commercially published books. I say "commercially published" because before the iPad I read all manuscript submissions in Stanza for iPhone. 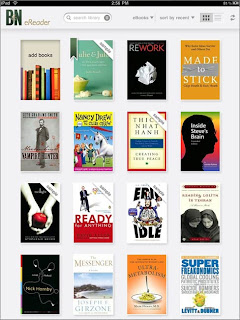 I've got about twenty ebooks now on each of the three apps, and while the majority of my ebooks were free, I have paid for books from all three. Swords & Deviltry was my only purchase on B&N, The Graveyard Book and Return of the Sword

, along with a few low-cost pulps (Doc Savage and Fu Manchu), were my Kindle purchases, and I've purchased six books so far via iBooks, including Neil Gaiman's Fragile Things, The House on Pooh Corner, The Mouse and the Motorcycle, Runaway Ralph, and the Beneath Ceaseless Skies anthology.

But I've been itching for B&N to get onboard iPad and downloaded it first thing yesterday morning. So...

The B&N eReader app does a lot of things very, very well.  With its plain white background on the home page and simple page swiping, it's not as sexy as iBooks, whose virtual bookshelf and realistic page turning emulation are really, really gorgeous. But what B&N lacks in style it more than makes up for in functionality, and its iPad version is far more user friendly than its iPhone app. It now opens its dictionary inside the page of the book, rather than pulling you out of the read as the iPhone version of the app did, allows for note taking and highlighting, has an assortment of font choices and sizes etc... Of course, some version of these tools are pretty much de rigueur now for any eReader. But B&N adds two features that are very, very nice. In addition to customizing the fonts, you can alter the width of the page's margins and you can alter the spacing between lines. Between changing the margins and changing the spacing, you can really, really create a perfectly tailored, comfortable reading experience. And then you can save that as a theme to apply later! This is brilliant, and may be the nicest feature on any of the three major apps. Against this, both iBooks and the Kindle app suddenly look very limited in what they allow. 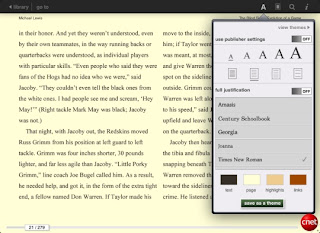 B&N's eReader also opens up the Table of Contents in a pop-up window, without pulling you out of your place in the book, along with tabs to bring up lists of your highlights and bookmarks. Which is another very nice feature. I also appreciate the fact that they have chosen to go with page numbers, rather than percentages or the perplexing Kindle location system. Yes, page count changes when you change font sizes and spacing, but then, it does the same thing when we raise the point size of a font in printing a physical book. It's still very nice aesthetically and psychologically to use actual page numbers.

I was also delighted to discover, when perusing Bram Stoker's Dracula,  that the end notes were hyperlinked. Clicking on them took me to a list of notes at the end of the chapter, with a convenient "Back" button to return me to my place in the text. Nice.

I did have a few problems with the eReader. It crashed on me twice when I was trying to highlight a chapter title in Swords & Deviltry, I have two copies of the same edition of Dracula displayed in my shelf and can't seem to get it to just show just one, and when you delete a book on your shelf, it still shows the cover with a "Download" label across it. To actually get rid of my complimentary copy of Little Women -- (no disrespect to Louisa May Alcott) -- I had to go to B&N.com in the Safari browser and remove it permanently from My Library. This is a minor inconvenience but it will probably have the effect of preventing me from sampling as many titles as I otherwise would. I haven't tried the LendMe feature yet, but it is obviously a plus. I did make notes and highlights in a book and was disappointed to see that they didn't carry across to my iPhone edition.

Overall, it's a very good app, with a lot to recommend it, and a few key features that score higher than its competitors. And, of course, I'm sure it will only get better as updates are issued. 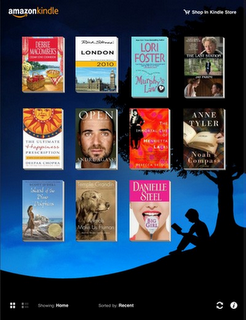 on the Kindle app, which, thanks to Whispersync, was read on both my iPhone and iPad.

Kindle's aforementioned perplexing locations are augmented with page numbers for the iPad version, and I also find the actual layout of text more attractive on the iPad than on the iPhone. Visually, the home page is prettier than the B&N eReader app, and the Whispersync technology can't be beat. Its amazing how many occasions every day you find yourself with a minute or three where you can pull your phone out and read a few paragraphs, where you might not have easy access to the larger iPad.  Currently neither B&N nor Apple's iBooks has a syncing feature, though both promise that in the next iteration of their iPhone app software updates. And, of course, Kindle has by far the best selection of titles.

Where iBooks scores over both of them is in presentation and in the ability to easily load ePub format ebooks acquired from other sources into iBooks with just one click. Because of this, iBooks has been my default reader for amassing a library, in the same way all my music, whether purchased digitally or ripped from CDs, goes into iTunes. I also use Stanza Desktop's "Save as ePub" feature to convert Word Docs into ePub format files, so now I'm doing all my manuscript reading on the iPad. And it's amazing how helpful it is, when thinking about how a particularly manuscript would be if you acquired it and turned it into a book, to actually see it looking like a book, with actual pages. It's really intuitively helpful to me, when judging a book's pacing, to be able to see how far into the book I am, and the feature that tells you how many pages remain in a chapter is fantastic! 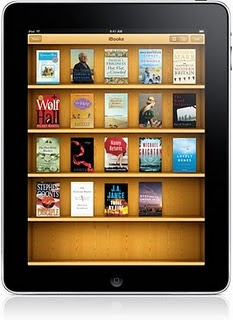 Currently you can't take notes in iBooks, though I can't imagine that will be long in coming, and while you can copy sections of text from non DRM's ePub files, you can't cut and past lines into email from the books purchased from the iBookstore (at least the ones I've purchased). So the annotation features in Kindle and B&N score over iBooks in that respect. The iBooks reader needs to do more than it does, but its too strongest selling points - its beauty and its ability to accept ePub files into iTunes - are extremely attractive features that will probably keep it in the top slot for my primary reader. On the downside, the selection at iBooks isn't what it needs to be, though that is something that will be changing fast. But given there is no way to browse through the iBookstore, unless an author/book is listed in the promotional displays in a genre's category, there is no way to know if the book is there except by running a search, which right now will return no results more often than not.

Sadly, none of the eReaders allow you to bring up a full-page view of the cover, which is a shame given how good the iPad is at displaying art. Since this is a complaint with all three apps, I'm wondering if it is somehow a limitation of ePub. Either way, it seems like an essential element of book reading that needs to be addressed and thus, presumably, will be.

In summary, B&N's eReader app is a welcome addition to the iPad eReader space and offers enough that I won't be penalizing it too much for being late to the party. iBooks versatility will make it my default manuscript reading app, and probably my first choice for an eReader, but I anticipate continuing to buy some books from the Kindle (due, if nothing else, to their wide selection) and some from B&N (most notably, the rest of the Fafhrd and Gray Mouser series). Instead of having one reading app and one online library, it looks like I'm going to have one device (or family of devices) and multiple apps. For now, I can live with that. Of course, all the competition between apps and devices can only be good for the overall evolution of the eReader, so who knows where things will be next year? Personally, I'm eager to find out.