For Your Viewing Pleasure: The Office of Shadow

Posted by Lou Anders
The Office of Shadow 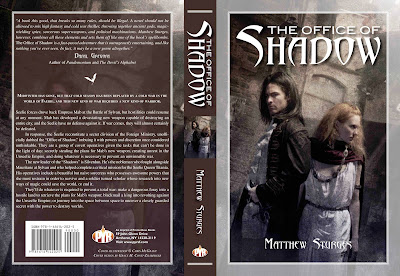 Midwinter has gone, but that cold season has been replaced by a cold war in the world of Faerie, and this new kind of war requires a new kind of warrior.

Seelie forces drove back Empress Mab at the Battle of Sylvan, but hostilities could resume at any moment. Mab has developed a devastating new weapon capable of destroying an entire city, and the Seelie have no defense against it. If war comes, they will almost certainly be defeated.

In response, the Seelie reconstitutes a secret division of the Foreign Ministry, unofficially dubbed the "Office of Shadow," imbuing it with powers and discretion once considered unthinkable. They are a group of covert operatives given the tasks that can't be done in the light of day: secretly stealing the plans for Mab's new weapon, creating unrest in the Unseelie Empire, and doing whatever is necessary to prevent an unwinnable war.

The new leader of the "Shadows" is Silverdun. He's the nobleman who fought alongside Mauritane at Sylvan and who helped complete a critical mission for the Seelie Queen Titania. His operatives include a beautiful but naïve sorceress who possesses awesome powers that she must restrain in order to survive and a soldier turned scholar whose research into new ways of magic could save the world, or end it.

They'll do whatever is required to prevent a total war: make a dangerous foray into a hostile land to retrieve the plans for Mab's weapon; blackmail a king into revolting against the Unseelie Empire; journey into the space between space to uncover a closely guarded secret with the power to destroy worlds.
Coming in June!
at 2:31 PM