Jump into Infoquake with io9 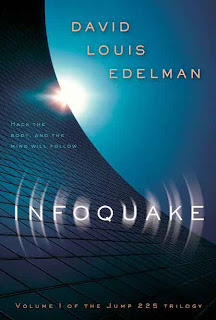 , the first volume of his acclaimed Jump 225 trilogy. Here is their review of the third and final volume, the recently released Geosynchron.

Meanwhile, if you haven't checked out David Louis Edelman's work, then perhaps the io9 reading is the excuse you've been waiting for. But if you need further impetus:

Fantasy Book Critic said of Geosynchon that it "plays on the level of the masters of modern sf like A. Reynolds and PF Hamilton," and was "so far the best core-sf novel I've read in 2010." 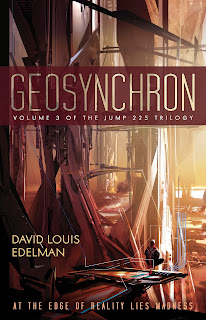 SFFWorld agreed and said, "The Jump 225 Trilogy is a must read, an instant classic, and a work of SF that will help define this first decade of the 21st Century and could cast a long shadow for many years to come."

Meanwhile, Locus said of the whole trilogy that, "This smart, idiosyncratic blend of cyberpunk, libertarian entrepreneurship, and social engineering will, I think, stand as a seminal work of 21st century SF."

Just a few of the many enthusiastic reviews that are coming in.
at 12:09 PM