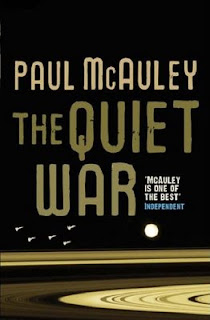 Not long now until the winner of this year's Arthur C Clarke Award (the UK's premier SF gong, as if you didn't know) is announced. It so happens that I've reviewed all six of the titles in this year's shortlist and weighed them against one another. [And they are: Song of Time, Ian R. MacLeod - PS Publishing; The Quiet War, Paul McAuley – Gollancz; House of Suns, Alastair Reynolds – Gollancz; Anathem,Neal Stephenson – Atlantic; The Margarets, Sheri S. Tepper – Gollancz; Martin Martin’s on the Other Side, Mark Wernham – Jonathan Cape]. My conclusion? The best of the bunch, by a clear margin, is Paul McAuley's The Quiet War. This doesn't mean it's necessarily going to win, and actually I don't have a good record of predicting the Clarkes. But it does mean it's a very very good piece of writing. For those of you Stateside who haven't had the chance to buy it yet, I'd say Pyr's edition can hardly come soon enough. 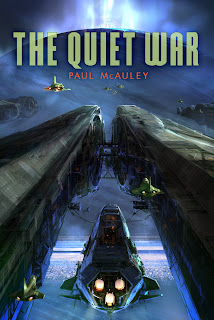 [PS: I'm not attending this year's UK Eastercon, but my insider information is that the annual 'Not The Clarkes' panel, which discusses the shortlist, also ended up plumping for McAuley's novel.]
at 5:48 AM