How I Promoted My Book by David Louis Edelman 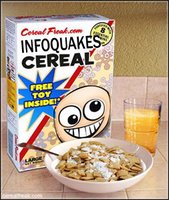 When I started to make a list of all the promotional efforts I've made in the past year, I started to feel — well, a little embarrassed. To an outsider, it must look like I do nothing all day but come up with ways to move copies of Infoquake. The "Infoquakes Cereal" pic here is meant to be a joke, but honestly, sometimes it feels like I've tried everything but a sugary cereal for kids.

Here, then, are the promotional efforts I did that I think were well worth doing:

I also did a number of promotional efforts that may have had some positive impact, but it's hard to tell:

Of course, there were also a number of things I tried to promote my book that have had seemingly no impact or fell flat altogether:

So now that you've gone through these lists of all the sh** I've done to promote Infoquake and shaken your head in amazement/befuddlement at my persistence/foolishness, what lessons have I learned? What wisdom do I have to impart to other authors about how to promote their books?

1. You don't necessarily need to spend a lot of money. Almost everything on the "useful effort" list above is a cheap or free enterprise. Conventions, of course, can be expensive — but surely you can do what I did, which is to attend cons where you can stay with relatives or friends and use frequent fliers/hotel points. Designing and programming a website can also be expensive if you don't know what you're doing — but it's perfectly acceptable to use free WordPress software and a free WordPress template instead of hiring a designer/programmer like me.

2. Play to your strengths. My strengths (luckily) are web consulting and online marketing. As I've discovered, I'm a mediocre public speaker and not exactly a champion debater. I don't have the world's biggest Rolodex. But I've managed to find some areas that fit my comfort zone where I could excel.

3. Recognize that the most important aspects of book promotion are the ones you have little or no control over. Sure, spending time doing an interview with a science fiction fan site might get your name out there and sell 10 or 20 or 100 or 300 books. But the buyer at Borders or Barnes & Noble can give you thousands and thousands of book sales if he/she has enough confidence in the book to place a big order. The reverse, unfortunately, is also true.

4. Nobody knows when you fail... I did some research on discussion groups and ended up settling on Yahoo! Groups for an author forum. I created the forum, publicized it in half a dozen places, and nobody cared. So? I took down the link, I shrugged my shoulders, I moved on. People in the publishing biz might be able to track down your BookScan numbers and see how and where (and if) your book is selling, but nobody else is going to bother.

5. ...But let everybody know when you succeed. Emphasize the positive. Spread the good word. Tell your friends. Brag about it on your blog.

6. You, the author, are the only one who really gets to decide if you succeeded or not. Today I got a note on MySpace from a reader saying this: "Don't think I'm blowing smoke up your hindparts when I say that Infoquake is easily one of the best books I've ever read.... The depth and detail of this new world rank right up there with Neal Stephenson's Diamond Age." It's comments like that that make me sit back and think, y'know, I don't care if I sell another copy of the book. I've done what I set out to do.