Read an excerpt from Supersymmetry

Posted by Lisa Kay
If you like a little more science in your fiction and a little more action with your plot, and somehow you haven't tried David Walton's latest thrillers then you're really, really missing out!  The love has been rolling in for his newest release Supersymmetry.   Check out the first chapter excerpt below to see what all the fuss is about. 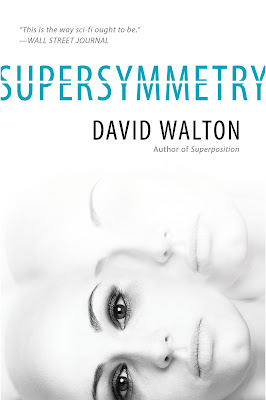 “Fast-paced, mind-bending, super-scientific yet fully accessible and very understandable to the layman reader.  Full of new possibilities and probabilities, Supersymmetry gives readers a peek into what the future may hold and the cost that comes with it.  This is a science fiction novel full of humanity and all its inherent beauty and ugliness. FANTASTIC - KEEPER”
-RT Book Reviews

“Propelled by high-speed action and digestible science that makes you feel smarter just by reading about it, Supersymmetry is among the best in near-future science fiction.”
-Omnivoracious

“A story with cool science and a good heart. All in all, I was completely entertained by this smart, imaginative quantum thriller.”
-Fantasy Literature