For Your Viewing Pleasure: Mirror Maze 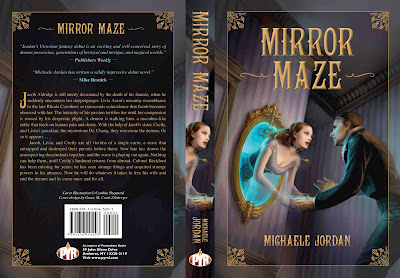 Coming in October
Jacob Aldridge is still utterly devastated by the death of his fiancée when he suddenly encounters her doppelganger. Livia Aram’s uncanny resemblance to the late Rhoda Carothers so transcends coincidence that Jacob becomes obsessed with her. The intensity of his passion terrifies her until her compassion is roused by his desperate plight. A demon is stalking him, a succubus-like entity that feeds on human pain and desire. With the help of Jacob’s sister, Cecily, and Livia’s guardian, the mysterious Dr. Chang, they overcome the demon.  Or so it appears. . . .

Jacob, Liva, and Cecily are all victims of a single curse, a curse which entrapped and destroyed their parents before them. Now fate has drawn their descendants together again, and the curse is playing out. Nothing can help them, until Cecily’s husband returns from abroad. Colonel Beckford has been missing for years; he has seen strange things and acquired strange powers in his absence.  Now he will do whatever it takes to free his wife and eliminate the demon and its curse once and for all.
at 12:09 PM