Posted by Rene Sears
Welcome to the first of our Pyr author round tables!

In what we intend as a regular Pyr-o-mania feature, we will be asking our authors a few questions about writing and their books. This month, Mark Chadbourn (The Scar-Crow Men), Jasper Kent (Thirteen Years Later), and James Barclay (Demonstorm) join us.


-How much pre-planning goes into a book? Do you use an outline, or write non-linearly? Pants or plot?
Mark Chadb 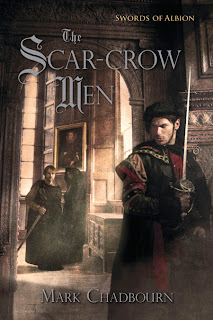 ourn: I write using "tent-poles" - I know the beginning, the main events and turning points along the way and the end. But there needs to be lots of space among that structure because all the best, most surprising, most creative work comes from the unconscious, while you're writing. Odd twists, details, quirks, character traits, mysteries, the parts that make a book come alive all rise from the deep mind. If you outline too strictly, you deny all those things the opportunity to surface.
Jasper Kent: I do a huge amount of planning. Before I start writing I have a scene by scene breakdown, usually 20-25 pages long. I also do a spreadsheet to make it easy for me to find where plotlines first appear, develop and end. After that, the actual writing of the first draft is quick and intense – round about six weeks’ work. That’s not to say that ideas, plotlines and even characters don’t occur to me as I’m writing, but it does mean there’s very rarely a moment when I have no idea what to write. Of course, after that intense period of writing, the rewriting is as long and slow a process as the initial planning.


James Barclay: Well, I’m changing on this one... with The Raven books, I had an outline, knew the key events, who lived, who died etc and then just wrote. For those books it was an approach that worked extremely well. These days, though, I prefer a more detailed outline that will chart every event in the book chronologically. Then I’ll fill in the scenes around each event before I start writing. This is just to give me direction and I reserve the right to hate the direction and change it mid-draft if I find a better one. As far as characters are concerned, I’ve always had a good idea of the main players but my every book so far has thrown up a bit-player who becomes pivotal. I rather like that, someone for whom the minimal page time simply isn’t enough and who demands more.


-How much research goes into a book? How much do you do before you start, and how much happens over the course of writing the book?
MC: I write historical fantasy at the moment so the amount of research is vast - sometimes as much as three different strands in a single sentence. I do the over-arching research before I begin, involving the historical events, context and characters. But then I have to research continually while I'm writing because *everything* has to be real - from clothes and food to manners, location, decor and economics.
JK: Partly because of my own style, but also of necessity in writing historical fiction, I do a huge amount of research. All the novels of the Danilov Quintet are based against real historical events, and so one of the first steps in planning is to work out a calendar against which I can set my story. But it’s not enough just to be familiar with the actual period of the story, one also has to be familiar with what was going on generally at the time, and what came after. Also it can be very helpful to read contemporary (or close to contemporary) fiction – and when that’s Tolstoy and Dostoyevsky, you can’t go far wrong. Usually I’ve got quite a long reading list drawn up early on in research, which I find one of the great things about being a writer. During the actual writing, research tends to be more into little details that come up; in 1855, did people use matches or cigarette lighters? Before rewriting, I find it a good idea to go back over the history books (or, better, find a new one covering the period) to make sure that my imagination hasn’t dragged me too far from historical truth.
JB: I do as little research as possible before starting a book because I think it is the best way never to start. Of course you run the risk of assumptions proving utterly false and having to change things but I very much prefer to research as I go. I tend to research a good deal during the initial drafting and I find it focuses my research in the right area which saves time.
- What goes into making a villain? In what ways do you try to complement or mirror your hero when you're coming up with a villain?
MC: The protagonist and antagonist are inextricably linked - each one needs the other to thrive. There should be similarities, in outlook, psychology, aims or thematically, which will bind them together and underline the differing choices made during dilemmas. But they have to be significant opposites at some level, balancing strengths and weaknesses. To illustrate, I'd put forward Batman and the Joker. Both have psychological similarities, which Alan Moore laid bare in The Killing Joke graphic novel. But they are opposites because Batman attempts to impose order and the Joker wants to instil chaos. To be honest, I don't like the terms 'hero' and 'villain' b 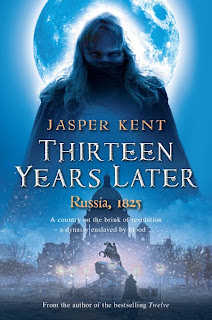 ecause they're unrealistic. All you have are people who want something, and then it's a matter of how they go about getting it. Normally, I look to mirror the two poles in relation to psychology or psychological flaws. If I had to use the terms, I'd say a hero is someone who overcomes his innate flaws and a villain is someone who gives in to them. But it should be much more complex than that. I think it's always nice if you can see both sides of the conflict.


JK: So far in the Danilov Quintet I’ve only got one central villain – Iuda. He seems to work pretty well, but it’s difficult to describe how he came about without giving too much away. The twist at the end of Twelve is the essential idea to how Iuda works.
JB: The key thing about a villain is that he or she does not see his or herself as a villain. You can’t just be evil for evil’s sake. If you’re going to destroy a land, there has to be a reason why. Everything you do has to have purpose and your moral and ethical standpoints have to be consistent. They may be horrific and twisted morals and ethics to us but the villain must live by them. Everything else stems from that. I do not try and mirror heroes and villains. They each do what they do as reactions to each other in the course of the novel.
-What do you find compelling about fantasy? What draws you to the kinds of stories that you write?
MC: I suppose I ought to say sword fights, flapping cloaks and big dragons, but I will risk being accused of pretension. I'm interested in talking about big philosophical issues and fantasy allows me to do that on a complementary grand canvas. You can get into it with all sorts of symbolism and Jungian archetypes and then bury it deeply in a rollicking good story which can be read on many levels. I'm a Romantic at heart, and fantasy allows me to indulge that worldview in a way that other literary forms don't. I like how fantasy lets you disconnect from the modern world and take a different, perhaps more pure perspective, on what it means to be human.
JK: I’m not sure I’m drawn to fantasy in the broadest sense. What I like to do is twist reality and history by a very slight amount. With Thirteen Years Later I was given a gift in that there is genuine mystery and rumour concerning the death of Tsar Alexander I. I find it fun to try and write a weird explanation that fits the facts, rather than to great an entire world from scratch. 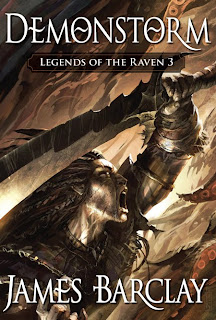 unfettered adventure and heroism in fantasy. I love the boundless creativity within it and I love the incredible enthusiasm of authors, publishers and readers for the genre. Nothing is impossible and we have writers able to make the implausible utterly compelling, realistic and fascinating. To read a talented new fantasy author and be transported by them is just a joy. As for me, I have always loved to read, among other things, novels that provide genuine tension, excitement and breathless entertainment. And those are the sort of books I appear to be best at writing and it seems sensible to play to your strengths.
-Many writers mention being inspired by music. Even if that's not true for you, what kind of music do you like? Who is your favorite musician?
MC: I listen to music on earphones all the time when I'm writing - so much that I find it hard to write without it. I have very eclectic tastes and will pretty much listen to anything; sometimes it's a matter of matching the style with the mood I'm trying to evoke. For instance, when I wrote a novel called Nocturne, set in the New Orleans magical underworld, I only listened to jazz. Let's see, current playlist includes Jay-Z and Alicia Keys - Empire State of Mind, Sunbears!, Civil Twilight, Apartment, Two Door Cinema Club, Man Alive, The Doors, Air, Arcade Fire, Villagers, Laura Marling, Dropkick Murphys, Nine Inch Nails, Bat for Lashes and the Beach Boys. I have a particular fondness for sixties psychedelia, and often I listen to soundtracks while writing. The last six months was mainly dominated by Hans Zimmer's Inception soundtrack which is a remarkable piece of work. It would be hard to pin down a favourite band as they change all the time, depending on my mood, but I have a fondness for Zero 7, The Doors and Julian Cope who used to front Teardrop Explodes in the 80s and has done some interesting modern psychedelia.


JK: I’m very interested in music. I play piano and bass guitar, and before writing novels I used to write music, particularly for musicals (more info here). However, I don’t find that music has much direct impact on my writing. I can’t treat music as background, so I never listen to it when I’m writing and rarely when I’m reading. Having said that, when you’re writing novels about the nineteenth century, you can’t ignore the musical giants who were around at the time, so there’s plenty about that in the books. At the moment, possibly because of what I’m writing about, I’m very much into Russian composers, though more 20th than 19th century – Stravinsky and Shostakovich.
JB: I don’t think I am inspired by music. I don’t listen to music all that much. I’m a rock fan at heart, and I was a new romantic back in the 80s. Favourite musicians and bands? Jethro Tull, AC/DC, David Bowie, Ultravox, Jools Holland and Robbie Williams are top of the heap.