A Brief History of Tanusha 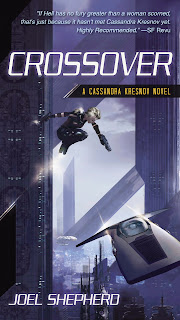 Following on from my world-building piece about ‘Sasha’, I thought I’d do something similar for the ‘Cassandra Kresnov Series’.

Obviously there’s a fair few scientific improbabilities in Cassandra’s world, starting with Earthlike planets of roughly similar gravity, atmosphere, etc. My technical excuse is that the primary scientific improbability (faster than light travel) gives humanity such a wide range that even if such worlds are a million to one, humanity now has access to tens of millions of stars, so logically there are quite a few million-to-one shots inside that range. But the real point of a story like Cassandra’s is not to ponder scientific accuracy, it’s to tell a good story. So long as it’s vaguely plausible, science shouldn’t get in the way. Besides which, no one has any real idea how many Earthlike planets there are... maybe there’s plenty, just waiting for us to figure a way to reach and colonise.

Tanusha is one such planet. We never really see the planet because we’re concentrated where most of the people are, in the city of Tanusha. Tanusha has 57 million people at the time of ‘Crossover’, though even by ‘Killswitch’ it’s gone up a million or so. It’s a boomtown, and was planned that way from inception. For one thing, environmentalists have it wrong when they oppose large cities, putting people into big cities keeps them out of the countryside, so all environmentalists should be fans of skyscrapers -- cities that aren’t allowed to grow upward will grow outward instead, eating natural land as they go. Dense cities are also more economically productive, which is not to say farmers are unnecessary (though with futuristic hydroponics, synthetic food replication etc, who knows?) only to say that the more we move into the future, the less significant farming becomes as a percentage of Gross Domestic Product in any economy. That still leaves us with mining, but again with nano-tech and replication technologies, who knows where minerals will be coming from?