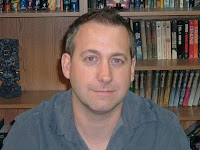 A little while back, I alluded on Twitter (@Pyr_Books) to being about to make someone's day with an offer. Well, that someone was debut novelist Jon Sprunk, and that offer was for his wonderful fantasy trilogy, of Shadow's Son, Shadow's Lure, and Shadow's Master. Sprunk is a Pennsylvania-based author with several small-press short story publications to his credits. He impressed me with the strength of his world-building, how he conjured credibility from a a few impressive details, and with his characterizations and imagination.

The first book, Shadow’s Son, is the story of an assassin thrust into the middle of a political and religious upheaval that threatens to topple the last bastion of civilization. It's got everything that Pyr fantasy is coming to represent - great action, grit & grime, morally ambiguous characters, strong females who are more than foils, complex politics, actual magic, and lots and lots of swordplay. The first book will be out around Summer 2010, which is a while to wait, but I think you guys are going to like it.