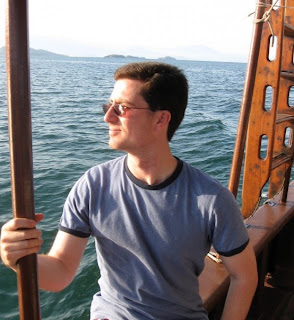 Robert Rhodes, a published writer from Spartanburg, South Carolina, wrote the Second-place essay in the Pyr and Dragons Adventure contest.

Currently, Rhodes is writing the '25 Heroes in 2010' series at FantasyLiterature.com.

Rhodes will receive a complete set of Pyr books as published through June 1, 2010 and a commemorative Pyr fifth-anniversary keepsake which is being produced for Dragon*Con.

Please enjoy "Servants of the Secret Fire" by Robert Rhodes:

The Balrog reached the bridge. Gandalf stood in the middle of the span, leaning on the staff in his left hand, but in his other hand Glamdring gleamed, cold and white. …
"You cannot pass," he said. The orcs stood still, and a dead silence fell. "I am a servant of the Secret Fire, wielder of the flame of Anor. You cannot pass. The dark fire will not avail you, flame of Udûn. Go back to the Shadow! You cannot pass."
--J.R.R. Tolkien, The Fellowship of the Ring

When I was seven years old, my grandparents gave me a Dungeons & Dragons boxed set, the basic edition with an Erol Otus cover on which a spear-wielding fighter in purple armor and a fireball-hurling magic-user, one leg outthrust from her scarlet robes, confront a green dragon on the edge of a subterranean lake. The box contained the rule book, The Keep on the Borderlands adventure module, and six polyhedral dice the color—depending on your light source and mood—of either wet sandstone or cat vomit. It was the most influential gift of my life.

In concert with the original Star Wars trilogy and a variety of superhero comic books, D&D kindled in me an abiding love of heroism and an enchantment with other worlds. Years later, having assumed the responsibilities of husband, father and citizen, I still count fantasy and science fiction ("speculative fiction" or "F&SF") as my go-to genres in literature and film. Well-executed F&SF can create excitement, escapism, and pathos as effectively as any other genre; and in the past nine years, during which I've spent thousands of hours prosecuting criminals and protecting abused children, this quality of F&SF has helped shield me from burnout. But in this era, as we struggle with the transition from a natural order minimally impacted by human activity to one markedly transformed, F&SF serve us in several other ways.

First, F&SF recapture who we were. Time-travel tales and historical fantasies remind those of us in industrialized regions that, before we soared above clouds and sped along graded roads in metal capsules, we ran and rode horses and endured the seas' inexorable winds and waves. Instead of staring into the magic mirrors of our televisions and computers each night, we gathered with our communities to tell stories and make music in taverns or courts, or around bonfires beneath the stars. Nor did we dismiss the stars as distant balls of flaming gas; instead we scrutinized them as entities or harbingers whose arcs could alter the fates of all who walked the mysterious, motionless earth.

While stories set in pre-industrial times reveal that our bond with the natural world was often more visceral and intense, they also remind us of the difficulties inherent in living without refrigeration, long-distance communication, anesthesia—to say nothing of increased rights and protections for many women, children, and minorities. The reader of such a story will inevitably compare the characteristics of its societies with those of his own and form his own opinions as to which are desirable and undesirable.

Similarly, F&SF contemplate who we will be. Science fiction, in particular, operates as the shadow that precedes the imprint of technology's cutting edge upon reality. The most thoughtful stories foresee the practical and ethical issues inherent in developments such as cloning, prenatal genetic modification, artificial intelligence, and cybernetic implants—in addition to more epic possibilities, such as nuclear holocaust and alien contact. Through such imaginative consideration, we can more comprehensively debate which laws should govern technological developments, or whether certain technologies should be developed at all.

Realistic, non-speculative literature also can depict the past and future; however, F&SF evoke a sense of otherness. Through the imaginations of its authors, speculative fiction has emerged as the genre that most consistently introduces places and situations beyond the scope of our available experience. This is important not only for the sake of entertainment, but also for intellectual and emotional renewal. Although children may wonderfully imagine what exists in a nearby forest or beyond and beneath snow-crowned mountains, adults risk the paralysis of bored cynicism when they realize that the habitable world has been exhaustively mapped and that no relationship or community is flawless. The spirit of manifest destiny, the romantic dream that pristine lands await us on the horizon, is dead. F&SF reassure us, though, that we aren't helplessly trapped and, on the contrary, the horizons of the mind are infinite.

In the same way, F&SF preserve the heroic tradition. (This does not diminish the artistry or importance of "dark" works that explore our ambiguities, contradictions and failures. Antiheroes and villains can still, after all, be the focal points of truths and consequences.) Unlike most modern fiction, F&SF, particularly F&SF for young readers, often transport us into realms where clearly identified and tangible evils threaten all goodness, beauty, and freedom. But if an evil is known and tangible, it is also vulnerable to a protagonist's will and courage. To those disheartened by the pace of desired change, whether adults frustrated by bureaucracy or youths by the rules of their homes and schools, the shining thrust of a sword—Éowyn smiting the Witch-King—is a glorious release. Hope endures in the blackest pit; darkness will never extinguish our light. Through the repetition of these truths in story, the eternal flame of heroism is passed from one generation to the next.

In "The Fantasy Writer's Assistant," a story by award-winning author Jeffrey Ford, the writer Ashmolean asks, "What good is the illusion of fiction if it cannot show us a way to become the people we need to be?". This concern, as evidenced by the previous observations, is almost universal in F&SF, no less than in heroic literature of the past: The Iliad, Beowulf, The Three Musketeers, To Kill a Mockingbird. In their finest hours, F&SF reveal who we are and should be in our finest hours. The authors and readers of F&SF are students of the past, architects of the future, dreamers of the other. They are torchbearers of heroism, and because of these vocations, they have both the willingness to be inspired and the vision to inspire. As President John F. Kennedy said, "The problems of the world cannot be solved by skeptics or cynics whose horizons are limited by the obvious realities. We need men who can dream of things that never were."

It hardly matters, then, whether devotees of F&SF possess the martial skill or charisma of Aragorn, Ellen Ripley, or William Adama. When we create and share in others' inspiring creations, we perpetuate the energy unleashed at the dawn of time. We become servants of the Secret Fire, with the power to bring truth and hope into the dark places around us. We remember that words and stories, even of those who are distant or dead, contain the power to unite and encourage, heal and transform.

Our words, and the stories of our lives, can resonate with this power. For each of us, there is a bridge between who we are and who we should be, and we do not have forever to cross it. We need not cross it alone, however, but with our brethren and the Secret Fire, the flame that still burns in fantasy and science fiction, to guide us.

Through the shadows of our journey, the wizard's voice spurs us on: "Fly, you fools!"
at 2:50 PM