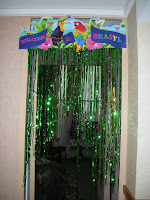 The party was Brazilian themed, complete with capirinas, the official drink of Brazil, a Brazilian flag, multiple bowls of delicious futbol shaped chocalote balls in the distinctive black and white foil wrappers, various bits and bobs. And scores of plastic frogs all over the tables. (In fact, the frogs were a big hit - and were scooped up by the handfuls by parents taking them home to the kids.)

Enough about the frogs, you say. So how did it go?

We were PACKED – with a great mix of fans and pros. In fact, at one point, we had 3 of the 5 Best Novel Hugo Nominees sprawled out in the back room at the same time. Alas, Rob Sawyer was elsewhere 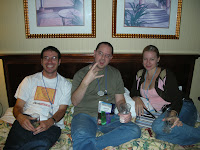 with a cold, and Michael Chabon - the actual winner of the Hugo- unable to attend the convention. But it was a wonderful mix of people, and while the room waxed and wanned from "crowded" to "even more crowded," it was never less than full. 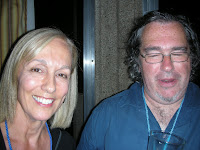 is Paolo Bacigalupi, Yanni Kuznia and John Scalzi, reclining on the bed in the back room and up to no good (trust me). Pictured right is Pyr author Kay Kenyon and our guest of honor, Ian McDonald, who in addition to giving the stamp of approval to the Pitu Cachaca used in the making of the capirinas also supplied a selection of the Brazilian music that "soundtracks" his novel. 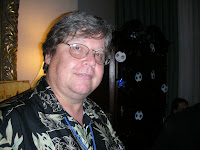 Also in attendance was Eisner-award winning writer Bill Willingham (left), of the incredibly-successful DC/Vertigo title Fables, who when I joked in an email the week previous - "What are you doing next Friday? Do you want to come to Denver for a party?" - was coincidentally planning on driving through Denver at the exact same time (to my delight and the delight of one very surprised fan!) 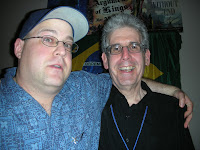 John W. Campbell Best New Writer nominee David Louis Edelman was in attendance as well, pictured here with his evil twin Scott. (The two are often mistaken, and, in fact, each have stories in separate volumes of The Solaris Book of New Science Fiction. My suggestion - they should collaborate for the next volume!) 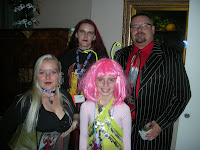 I don't think Night Shade Books's uber talented publisher Jeremy Lassen was actually with these three woman, but somehow they complement the zoot suit, so maybe he should engage them for entourage purposes. I get shades of a notion about a gang boss and his faery family.... 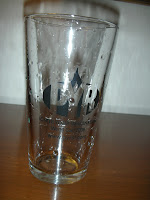 Oh! The swag! The first 100 guests received Pyr Pint Glasses - less the three that broke in transit, alas. The remaining 97 glasses were a HUGE success - real glass, with the Pyr logo, "Ignite Your Imagination", "World Con 2008" and our url on the side in black lettering. We served the first of the capirinas in them, and when they ran out, folks were really disappointed. Fortunately, some glassware had been discarded by drinkers who either didn’t realize they could keep ‘em or didn’t want to, and so we had a steady trade in rounding them up, washing them out, and repurposing them all night, so anytime a glass was found a cry of “who wants it?” brought lots of eager shouts. (Four were left over that evening and went immediately on the panels I had left. I wouldn't be at all surprised to see these things show up on eBay...)

Enormous thanks to Jill Maxick, our publicist who procured all the decorations and the chocolates and was unfortunately unable to attend at the last minute, and to Amy Greenan and Lynn Pasquale for all the posters, invites, book covers etc... Enormous thanks also due to Alexis Glynn Latner, who drove me all over downtown Denver day-of to procure food and drinks. 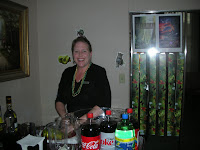 Thanks also to Kristina Eccles (left), the bartender Jill engaged to make our Brazilian drink, and to Jetsie de Vries (Interzone co-editor) and Paolo Bacigalupi (award winning short story author) who volunteered their muscle and help setting up. And we REALLY owe Jetsie de Vries (below, left) for above the call of duty help. Kristina was top notch. Really good to work with, and stayed an extra hour on from what we planned when we hit 11pm and still had a full house and plenty of cachaca, but she was SLAMMED, never able to stop for a single moment. Jetsie volunteered to be 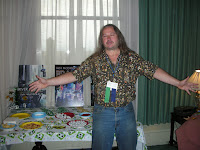 her bar back, and washed 110 limes, hand washed and dried all the cups in the case with the broken one to free it of glass-dust, kept her in ice (even heading out to beg ice off other parties when we ran out), bagged trash, and washed the discarded glasses so we could keep the party favors coming. He was incredible, stuck mostly in the bathroom over the sink off where we set up the bar, covered in sweat he was working it so hard. We are totally indebted, and he is a golden god.

And Pitu Cachaca? That sugarcane rum is pretty strong stuff!
at 3:17 PM